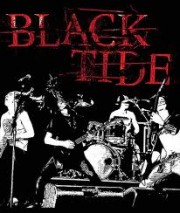 Metallers Black Tide have announced they will be opening for heavy metal gods, Iron Maiden for two show in Florida this April. The shows are to be held on consecutive nights, the 16th of April at Bank Atlantic, in Sunrise FL and the 17th of April at St. Pete Times in Tampa Fl.

The Band has this to say about the shows “We’re happy to announce that we will be opening two shows for Iron Maiden this April in Florida!  Hope to see you all out there for what is sure to be an unforgettable night!”

These are the only two American dates for Iron Maiden’s “Final Frontier World Tour 2011” which will take them all across the Globe including Japan, South America and Europe.