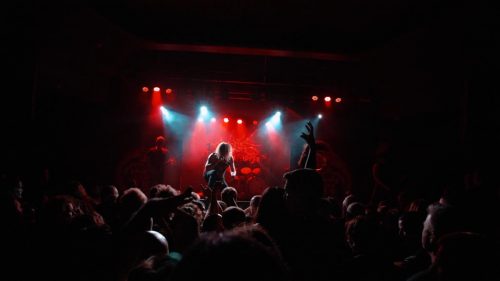 Happy last day of Trump, the best case for retroactive abortion that ever lived. God, the last four years were fucking disgraceful. What a complete nightmare combined with the utmost tacky, moronic bullshit gaslighting.

At least it looks like Iced Earth are facing some consequences for their idiot band leader’s role in the pointless capitol insurrection and got dropped. Talk about someone going down the tubes and squandering their talent for a loser like Trump.

Anyway, the world really needs to focus on the environment as well as stopping fascist enabling morons. Trump damaged the environmental protections more than any leader in American history (and he doesn’t deserve to be called a leader at all). Seems like a fitting way to send off this shit show by posting some Cattle Decapitation.

Cattle Decapitation released their latest record, Death Atlas, to critical acclaim in 2019; today, the band has launched a new video for the album track, “Finish Them”. Directed by Nicholas Vidler, the video features live footage from Cattle Decapitation’s sold-out shows in Melbourne, Australia in early 2020.

Vocalist Travis Ryan comments: “When traveling to Australia to embark on our Australia/New Zealand/Japan tour in early 2020, we wondered what would await us on their soil as bushfires were raging, claiming the lives of millions of wild animals, altering the lives of many of our fans and citizens of Australia. What we didn’t expect was record turnouts with serious rabid fans that I think just wanted to take their minds off the current state of affairs and do their best to have a good time given the utterly shit circumstances they were experiencing. We quickly organized meet and greets at the last minute and were able to raise well over $25,000AUD for the Cobargo Wildlife Sanctuary, who had pretty much lost everything in the fires. Thanks to the incredible support from our fans down under and through other folks ready to help, they were able to rebuild. We really felt like we had been given a gift by the fans, so we wanted to give back to these people who came out and raged with us by releasing our final music video for ‘Death Atlas,’ which showcases how sick the shows were and how truly amazing our fans are. Look close, maybe you’ll find yourself in the crowd! Looking forward to returning to the stage one day, hopefully soon!”

Enjoy this madness until you can watch the New Radicals reunite or whatever. Here’s to everyone who made it through the last four years and the ones we lost along the way.