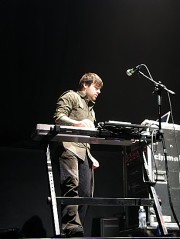 Cleveland, Ohio’s metal legends Chimaira issued this statement regarding the departure of their keyboardinst/programmer Chris Spicuzza:

“As we know this news sucks… hopefully this cheers you up a little.

“there are definitely samples, keys, electronics, and all sorts of other wizardry on this record. we’ve spent the past 12 years creating the atmospheric side of chimaira, and we can’t imagine listening to us without those cool bits either. each album brought new noises and a vibe to accompany that particular record. nothing has changed in that regard. this has always been an evolution. while it may seem like the end of days, we see this as another chapter. chimaira developed our sound together with chris, and although he is gone, his spirit, class, and the foundation he helped lay, will always remain.

“you know us. we don’t drive our cars looking through the rearview mirror. never have, never will. keep the glasses half full, amigos. it makes for a much more interesting ride….and we’re just getting started. yes, rob is still in Chimaira. Six Feet Under is a side project. Maynard James Keenan sings for 3 bands. Rob plays guitar for 3. It’s all gravy.

“Thanks for your continuous support”

Click here for the original departure statement from Spicuzza.

“As of early January I decided to leave Chimaira. The choice was extremely tough and stewed around in my mind for quite awhile. Many things led to this decision. The situation in Chimaira had ultimately become a negative environment that I had to get out of. Secondly, the music industry is completely fucked and honestly, I became concerned for my future. The amount of work and stress I took on got the best of me. I guess if you’re not happy or having fun, what’s the point?

As far as the new Chimaira album, I have not contributed to it. There is no doubt in my mind that Chimaira’s sound will not suffer minus my presence. The demos I heard showed great potential and I’m sure the album will melt faces. I’m proud to say I was on five Chimaira albums and wish those guys the best.

I’ve decided to shift gears from music to gaming. A group of friends and I started up a mobile gaming company. We’re about to launch our first iPhone game. It’s a location based RPG. Think of it as foursquare meets Mafia Wars but full of zombies. If you’re interested you can follow us on twitter, @irlgaming, or visit www.irlgaming.com.

I will always cherish the amazing worldwide journey Chimaira gave me. I took many things for granted that I now regret. Watching our last DVD helped me realize how fucking amazing our fans are. Thank you for being so passionate. I have a lifetime of memories thanks to you.

The dude who made noise and headbanged, Spicuzza.”