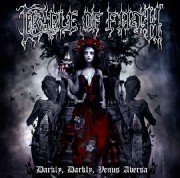 Cradle of Filth are back with their ninth full-length album (barring their compilations, live material, and some very wonderful EP’s) and I must say that I am very impressed. In fact, shocked may be the more appropriate word. CoF delivered what I thought was a really great album with 2008’s “Godspeed on Devil’s Thunder.” To these ears, “Godspeed” was the best thing that they had done since 2000’s “Midian,” which happens to be my favorite album of theirs, and I honestly was not expecting “Darkly, Darkly, Venus Aversa” to be so damn good. Though here I sit trying to figure out what has lit the fire under the “Filth” once again, for not only is the album good, it’s better than its predecessor.

“Darkly, Darkly, Venus Aversa” finds CoF once again doing the “Nestea” plunge into the concept album foray, but let’s be honest , who else does concept albums better? This time around the theme is based on Lilith, the mythological first wife of the bible’s Adam, and was qouted by vocalist Dani Filth as being the “feminine” companion piece to  “Godspeed.” Trying to pick the best material out of this album is quite the task, as all of the songs presented on Darkly, Darkly’… are of excellent caliber. “One Foul Step From The Abyss” is particularly grabbing for the simply mean riffs that guitarist’s Paul Allender and James Mcllroy employ, as is “Retreat Of The Sacred Heart” for it’s blistering thrash attack. “The Persecution Song” shows what CoF have always known, that when they slow things down a bit and let their sinister riffing breathe some, magical things can happen. Keyboardist, Ashley Ellylon (ex-Abigail Williams), brings to the game an outstanding performance, particularly getting my attention on “The Spawn Of Love And War.” Her ivory interplay seems to always enhance the mood of the songs yet never takes the spotlight away from the core guitar, bass, and drum asthetic of what I think a band’s focus should really be.

In fact, this is where I think CoF really pull off a great achievement with “Darkly, Darkly, Venus Aversa” in that while all the instrumentation is clear and audible the album shines in still maintaining the crunch and grit that many bands seem to pass on nowadays (Dimmu Borgir, I’m looking at you with your overly-produced orchestration and too smooth guitar tone). The keys never step on the guitars, the guitars don’t over-power the drums (or visa-versa), which by the way are blasting all over the place from Martin Skaroupka, the bass of Dave Pybus flows exactly where it needs to and the vocals are layed in perfectly within all of the chaos. Though I must say, I do miss the low growls that Dani used to grace us with, as his material of late has been more of the midrange nature that he employs. The album’s latter half is probably my favorite, as all the songs seem to have a bit more of their own identity to them, but honestly the album as a whole is alarmingly good. Add a wonderful performance as Lilith from Lucy Atkins and throw in some nice artwork and what you have here is a quality album form Cradle of Filth, that is easily one of the band’s best, if not the best, since “Midian.”

Did I mention that the digipack release comes with an extra disc containg four additional songs of face ripping filth. Definitely recommended for any fans of dark, extreme metal.