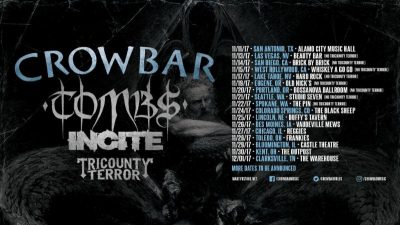 So, I can’t believe how terrible the writing is on the Marvel Inhumans show. Seriously, Black Bolt blows up a cop car and they just arrest him, throw him in gen pop and neither S.H.I.E.L.D. nor any other real heroes come to investigate who the fuck he is.  Karnak, who is supposed to never make mistakes and is played admirably by Ken Leung as he tries to juggle the hot turd Marvel’s shitty tv budget and rushed production schedule handed him and the rest of the decent enough cast , falls down a hill and bumps his head.  Karnak loses his powers from this idiotic mishap and then tries to hang out with some marijuana growers with the fakest looking herb I have ever seen on tv. So so corny. Thankfully, I am here today to remind y’all that something much more consistent exists…the eternally good legacies of Crowbar and Tombs. Neither band has ever made a bad record (though Crowbar admittedly have many more than most bands besides , like, the Melvins and Kreator, haha).

Crowbar are touring in support of The Serpent Only Lies and still deliver the goods just as powerfully as ever. Truly one of the most dogged underground legacy bands and it is great to see them bringing out a cool variety of acts representing different corners of metal.