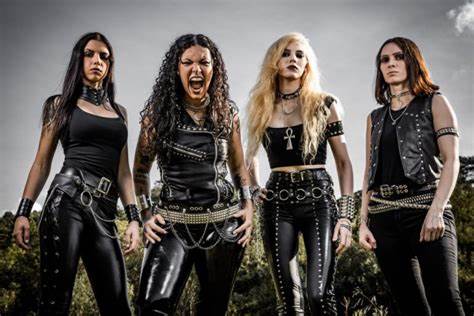 Believe me when I say that once you hear “Starvation” from one of my favorite new powerhouse metal combos CRYPTA you will be STARVING for…MORE CRYPTA!

I have been watching the Brazilian/Dutch death metal band ramp up their promo on social media and the hype is well-founded for this group!

CRYPTA will release their debut album, Echoes Of The Soul, on June 11 via Napalm Records.

Formed in June 2019, the four-piece consists of vocalist and bassist Fernanda Lira and Luana Dametto on drums (both former members of Brazilian thrash metallers NERVOSA), plus  guitarists Sonia Anubis (COBRA SPELL, ex-BURNING WITCHES) and Tainá Bergamaschi (ex-HAGBARD). I was already amazed by Sonia’s talent and also a Nervosa fan and it has been rad to discover Tainá as well. Hope you enjoy this group as much as I am. Their chemistry is no joke!!

I have a lot of respect for Fernanda Lira’s transparency in how it has meant a lot to brave the daunting task of starting over after a long time in another band and to still have love and support from real fans. “I should thrive not die from starvation,” howled in her intense snarling death voice is a highlight of the year for us over here so far, for sure! Solid mantra!