Danzig to play “Rock on the Range” festival 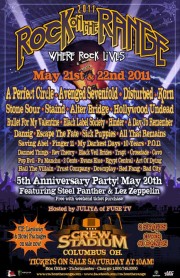 Metal legends Danzig join a huge list of hard rock bands for Columbus, Ohio’s “Rock On The Range Festival” on May 21st-May 22nd. The band will be joining such bands as A Perfect Circle, Avenged Sevenfold, Disturbed and Red Fang.