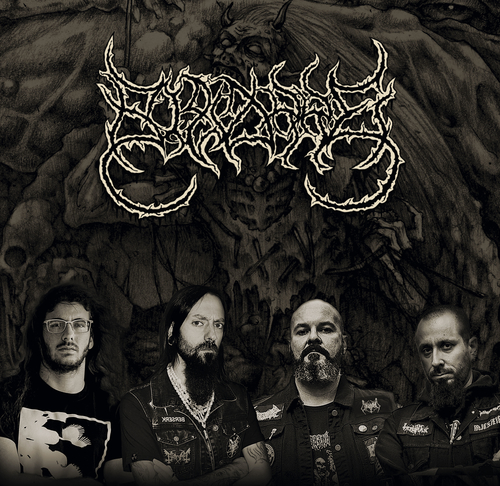 Taking a break from enjoying Henry Rollins camp it up as Tri-Klops to give you all a little death metal fix for your weekend. I had never heard BIZARRE from Spain before this morning and am really enjoying the mix of melodic soloing with the plague ridden corpse-like weight of the marching and oppressive main, rougher sound. This band crushes!

I was especially struck by the ominous might of the beastly vocals of Mark Berserk (APOSENTO), certainly some of the most head turning death metal vocals I have heard in awhile!

Transcending Obscurity will continue their tradition of high quality releases and merchandise with the gift of darkness that shall arrive when Invocation Codex is birthed upon the unsuspecting world! You will head bang! Check out ‘Ex Oblivione’ today (or also peep the Lovecraftian death of “The Shadow Over Innsmouth” on the label Bandcamp. Along with Crypts Of Despair and Revulsion, Bizarre prove that Transcending Obscurity is right near the front of the pack in upholding the oozing, pungent legacy of death metal in 2021!

In other corpse ripping news, Belgium’s notorious ABORTED have just released their second single “Drag me to Hell” off their forthcoming album ManiaCult, which will be released worldwide on September 10th via Century Media Records. Watch the visualizer for “Drag me to Hell”, HERE. I can never think of the phrase ‘Drag me to Hell’ without thinking of the totally fucked ending of the movie!
Anyhow, this song gives literally zero shits and is not for the meek.
“Alright alright! It’s good old Jack Burton here, and he’s got one thing to say: ‘get ready for the boom stick!’ We have such sights to show you—or rather sounds to play you—with the next single from ManiaCult, ‘Drag Me to Hell’. Trust me, you’re going to want to click that button and spread it before Wayland comes for YOU,” states ABORTED about their new single “Drag Me To Hell”.
“We also welcome Filip Danielsson of Humanity’s Last Breath to the ManiaCult via a killer guest spot. Considering Wayland’s goal is the end of humanity, we’d say Filip’s support is a great harbinger…”
For more exclusive ABORTED content don´t forget to check out the bands recently launched fan group ManiaCult, HERE.
ManiaCult will be available as CD Jewelcase, Ltd. CD Box (incl. Jewelcase + bonus track, Pop-up card, Metal-Pin & shaped patch), Deluxe Gatefold LP+CD & Poster in various colors and of course on all digital platforms. Pre-orders are available, HERE.