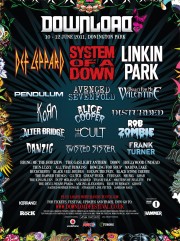 Sheffield hard rockers Def Leppard were recently announced as the third and final headliner for the UK’s Download Festival 2011. Def Leppard completed the lineup of headliners placing the band alongside System of a Down and Linkin Park. The band celebrated great success at Download 2009 and the festival anticipates its return to this year’s lineup. The three day festival will take place from the 10th – 12th of June in Donington Park. The lineup also includes acts such as Avenged Sevenfold and Bullet for my Valentine, plus loads more to follow.