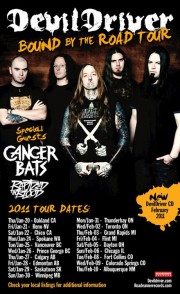 Californian heavy metallers Devil Driver have announced their “Bound by the Road”  North American tour dates with Cancer Bats and Baptized in Blood. The tour will take them from California into northern Canada, and then back down into the Eastern United States.

Devil Driver has recently been on the road in Europe and their stint there will end on December 4th in the Netherlands followed by a month and a half long hiatus as their North American tour starts on January 20th in Oakland.

The tour predates and coincides with the release of their upcoming album “Beast” which hits stores on February 22nd via RoadRunner records.