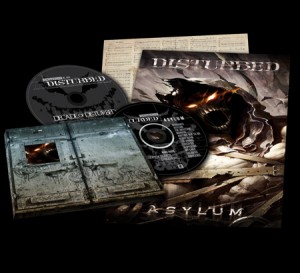 Disturbed’s new album Asylum will be available on August 31st, but you can pre-order your copy now. The Limited Edition CD/DVD comes with the full album including 2 bonus tracks (” Down With The Sickness ” & “Stricken” live), expanded artwork, a dvd featuring Decade of Disturbed a 60+ minute documentary plus Dissected 9 exclusive instrument video instuctionals, and an exclusive double-sided poster with guitar tabs.

For more details and to pre-order your copy visit disturbed1.com.