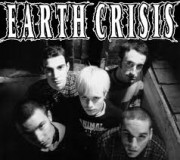 Syracuse Metalcore band Earth Crisis has entered the studio to begin work on their latest album. The name of the album has not been unveiled yet but the band has released these song names “Neutralize the Threat”, “Counterstrike”, and “100 Kiloton Blast”. The album is to be released sometime this summer through Century Media Records.

Scott Crouse comments, “So we began tracking our 6th full length album this week! We are really excited to work with Zeuss on this one, we have no doubt he will do this recording sonic justice! Hmm, maybe that’s what we’ll call the record?”