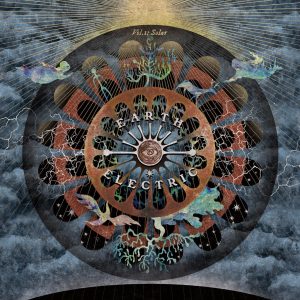 “We have chosen ‘The Endless Road’ as the third and final single from ‘Vol.1 Solar’. This one used to be called ‘Burn’ when it was in my Cubase folder – most likely due to the umpteen amount of times I’ve traveled abroad with that glorious Deep Purple album on my headphones. Somehow something must have slipped in; however, I digress. For me, this song represents something alluring and charming yet indefinitely old, something untamed and wild, something that transcribes perfectly into our unique take on hard rock. Carmen’s interest in Gypsy magic and aesthetics is massively present in the lyrics and the hypnotic melodies move forward in a carefree and sort of ‘unattached’ way assisting the music. To be honest, what is a rock band without having a song dedicated to these mysterious traveling people?”

As the press release says: ‘Vol. 1: Solar’, sees the renowned musician joined by front-woman Carmen Simoes (ex-AVA INFERI, ex-MOONSPELL), and marks a return to his roots by exploring a more progressive sound firmly based on rock music. Recorded in Orgone Studio with acclaimed producer Jaime Gomez Arellano (GHOST, CATHEDRAL, PARADISE LOST, PRIMORDIAL), ‘ Vol. 1: Solar’ will be released via Season of Mist worldwide on May 12.

I interviewed Rune once for the defunct Crusher Magazine years ago in the real Myspace days when he was in Ava Inferi and he was great to talk to. So cool to know he is doing music with Carmen again, one of the greatest singers in rock and metal who deserves way more acclaim. I also felt Mayhem was never as powerful again since Rune left, though they tried.

‘ Vol. 1: Solar’ is available for pre-order across multiple CD and LP formats at the Season of Mist E-Shop.

The artwork  was illustrated by Costin Chioreanu (GHOST, WATAIN, MAYHEM).