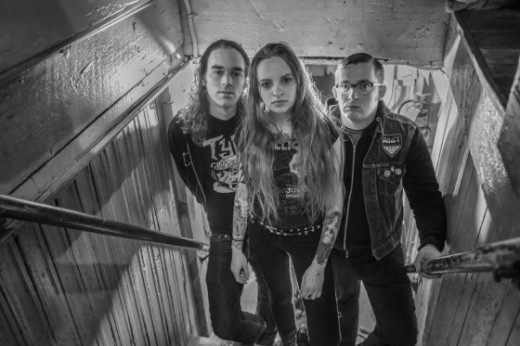 Did you think “Sickened By The Wake” had the sickest intro you’ve heard in awhile? Can’t wait to smash your face into a beer can listening to it live? You are soon to be granted your innermost desire!

After several months off the grid, metallic punk radicals, ENABLER, now pledge full-on annihilation in 2014, today announcing their revamped lineup, a plethora of upcoming live actions, and the completion of their highly anticipated second LP. Faster and faster we turn into cancer!!!

Over the past two years, ENABLER has followed their massive Southern Lord debut LP, All Hail The Void LP, with widespread touring of North America, Europe and Australia, and unloaded both their four-song Shift Of Redemption EP via Think Fast! Records and six-song Flies EP via The Compound in 2013. Since the Autumn release of Flies, things with the band have been seemingly quiet on the public front, but the band has been working harder than ever behind-the-scenes, and now confirm that 2014 will be their most frantic and busy year yet, beginning with the announcement of their newest lineup. ENABLER officially confirms Ryan Steigerwald as their full-time drummer. Steigerwald previously hails from the Chicago band, The Ox King, in addition to having filled-in as Ringworm’s drummer for the past nine years, and now takes the throne as ENABLER’s first full-time skinsmasher since the departure of Fall Out Boy’s Andy Hurley in 2012.

Having already performed locally with the stripped-down new lineup — rounded out by bassist/vocalist Amanda Daniels and founding vocalist/guitarist Jeff Lohrber — ENABLER has also been secretly recording their latest material over the past few months, and just this week put the finishing touches on their second LP, which will see release later this year; detailed info will be available soon.

The band will tour harder than ever in 2014, the first major trek of the year now confirmed to embark on April 10th as the trio forges across the country on their way to rip shit up at the sixteenth annual New England Metal & Hardcore Festival in Worcester, Massachusetts on April 17th. On the opening evening of the gigantic festival, ENABLER will join The Compound labelmates, Philly’s d-beat activists, Cop Problem, as well as All That Remains, Bleeding Through, Broken Hope, Fallujah, Oceano, Scars of Tomorrow and others. From there, ENABLER and Cop Problem will share stages in four more cities (including a date with Meth Quarry!) before ENABLER forges homeward. Other standout spots on the tour include Skeletal Lightning Fest II in Champagne, Illinois, Forward Ohio Fest in Columbus and more.

Subsequent to the tour, ENABLER is already confirmed to perform at Pouzza Fest in Montreal this May, followed directly by their first time invading Maryland Deathfest in Baltimore, and No Tomorrow Fest in Appleton, Wisconsin, with their participation in at least three more major North American tours being confirmed for announcement in the coming weeks.

ENABLER’s Flies EP is is now available in a high-quality/eco-friendly digipak, as the first release for Earsplit’s new label sect, The Compound. With five crushing original tracks as well as a cover of Sepultura’s iconic “Arise” anthem, the EP showcases some of the band’s most grimly melodic angular riffs yet, as always incessantly inundated with instantly memorable hooks and the band’s cynical “fuck off” vibes, mastered by Brad Boatright at Audiosiege (From Ashes Rise, Integrity, Tragedy, All Pigs Must Die). ENABLER and The Compound also licensed Flies to London-based Holy Roar Records who released the EP on massive 12” wax in two color schemes — black, or white splattered — both with a screen-printing of the cover art on the B-side.

Pick up Flies on CD or 12” wax via Earsplit Distro/The Compound RIGHT HERE and stream all of Flies at Revolver, HERE.

More On: Punk, Tour, Enabler, The Compound
share on: