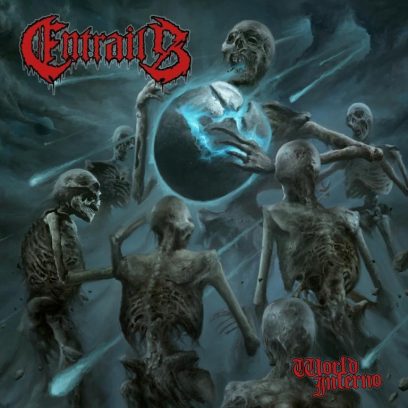 Swedish death mavens Entrails slime forth again to make most other bands look corny as heck. New album World Inferno (Pre Order and hear the new song HERE) will follow the mondo crushing Obliteration record. I like how the cover sort of calls to mind Raging Death as if the swampy skeleton and homies have finally conquered the entire world with metal. Sadly, Jack Terricloth from the amazing The World Inferno Friendship Society does not do spoken word cameos between album tracks, I am guessing. Regardless, Entrails are fucking amazing and just what the death doctor ordered to shake off those scene deathcore blues and get you feeling more like, uh…Wolverine Blues again, amirite?

Entrails guitarist Jimmy Lundqvist comments: “I am damn proud to finally unleash this nasty beast, a new chapter is written for Entrails to satisfy all old school maniacs out there. Having new blood in the band, Martin and Tommy, helped making this fifth album the rawest and heaviest to date. Prepare yourself to stretch out your neck in full headbanging!”

The recordings for World Inferno started in December 2016 in Lundqvist’s Bloodshed Studio. Dan Swano once again handled the mixing and mastering for the album. Dan Swano comments: “I don’t know if I had said this before, but I say it again. Every time I start thinking about putting together some new SweDeath project, Entrails show up at my doorstep with a new album to mix, and every time I think ‘Fuck!! – What’s the point in making my own project when this is so fucking good, and exactly what I wanted to do…’ And if I felt there were some details to improve upon from our previous work together, they fix that and then some, and return with an album even stronger than the previous one. What the fuck is going on in Linneryd!? Is Jimmy cloning death metal warriors in some barn over there or what!? To sum it up. Yet another amazing slab of SweDeath coming your way from Entrails! Beyond. Blown. Away!”

Track listing for World Inferno BELOW.