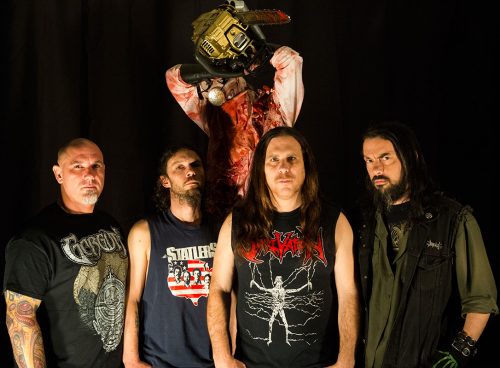 I friggin’ love Exhumed, by far my favorite gore grind/at times death obsessed political extreme metal band (would be close tie with Brutal Truth but they broke up and were not gore). Exhumeds 6th full-length arrives soon and they are doing their first concept album based on true events. Death Revenge takes place in the late 1820s in Edinburgh, Scotland and (according to the press release): tells the macabre tale of a series of brutal murders where the victims’ cadavers were sold to anatomists, amid a grisly underground trade of grave-robbery.

I was a big fan of Sarke’s Bogefod (which deserved WAY better reviews from most of the metal community) and am ready for another band to tackle a concept album about some unhappy endings. Recorded with producer Jarrett Pritchard (Goatwhore, Eternal, Gruesome), Death Revenge will surely be extreme and put Matt Harvey in serious contention for work dog of the bloody apocalypse between this, Expulsion and Gruesome!

“We’re very excited to see this record come out. It’s been a long time since we’ve fucked up your stereos! I think this record has a darker vibe than the last two, with a pretty gnarly tale of grave-robbery, dissection, murder and all sorts of general skullduggery. We dig it and we hope you filthy animals will too.”

Listen to the new song “Defenders of the Grave” via YouTube HERE and Bandcamp plus all streaming services AT THIS LOCATION.

Watch the official Death Revenge album trailer AT THIS LOCATION.

Death Revenge is set for release on October 13th on CD/LP/DLX LP&CASS/Digital via Relapse Records. Physical packages and digital order are available via Relapse.com HERE and Bandcamp HERE.