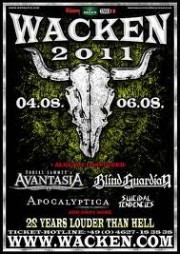 Thrash metal veterans Exodus have officially been added to Wacken Open Air 2011. The German music festival is renowned as one of the largest heavy metal festivals in the world. Avantasia, Blind Guardian, Rhapsody Of Fire, Apocalyptica, Ozzy Osbourne, Motorhead, Judas Priest, and Children of Bodom, are just a few of the other bands already confirmed for Wacken 2011.

Exodus released their ninth studio album “Exhibit B: The Human Condition” in May 2010 through Nuclear Blast.