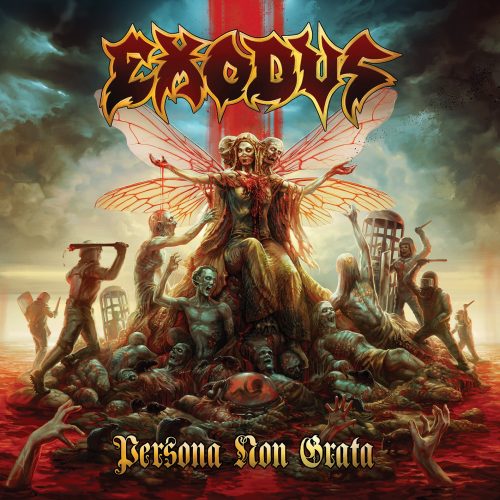 We got a new EXODUS tune for you, a ripping nasty bastard of an anthem that arrived a few days ago called “The Beatings Will Continue (Until Morale Improves)”. Zetro sounds positively inhabited by demons on this speed fest and Gary proves again he writes some of the most aggressive riffs in thrash. We have all been rooting for Tom Hunting, so it is nice to hear some explosive new music from the group’s forthcoming Persona Non Grata release to, uh, improve morale.

I can’t believe it has been so fucking long since Blood In, Blood Out already! Seven years?!! The album artwork reminds me of like Signs Of The Swarm and Pathology hung out with Sodom for a weekend of mutilating and mutating, so I guess that can go with some Exodus vibes as they have never had just one look to their records other than you see it and know “this shit is gonna be metal”.

The new album is out November 19th via Nuclear Blast.

Watch the music video for “The Beatings Will Continue (Until Morale Improves)” at https://nblast.de/Exodus-TBWC-YT