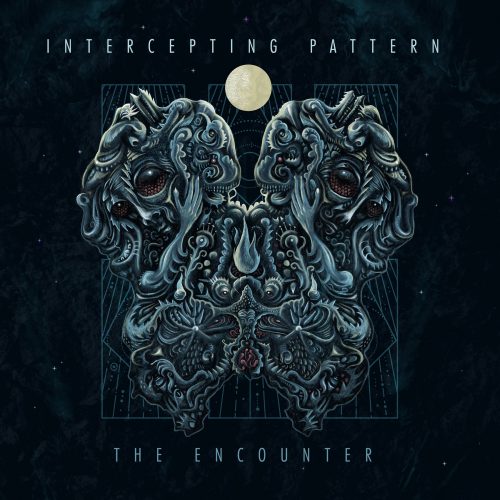 German-based progressive metal aliens Intercepting Pattern are proud to announce their upcoming debut album, The Encounter, which will be released on Friday, September 4th via Rising Nemesis Records. Cover artwork for The Encounter was handle by ex-Dark Tranquility guitarist Niklas Sundin known for his work with Arch Enemy, Dark Tranquility, In Flames, Green Carnation, and many others. The Encounter was produced, mixed, & mastered by Fountainhead (ex-Obscura, Pitts/Minnemann Project) at Fountainhead HQ in Germany.

Formed in 2016, the band is compromised of seasoned musicians known for their time in projects such as Defeated Sanity, Infecting the Swarm, and Cerebric Turmoil. Created and designed as one free-flowing 30-minute long genre-bending composition, The Encounter ebbs and flows between heavy syncopated grooves, jazz fusion flourishes, ethereal synth layered passages, and cybernetic death metal with seamless ease. Harkening back to the futuristic stylings of Frederik Thordendal’s Special Defects and Meshuggah, The Encounter draws from a deep well of progressive metal influences while forging a path all their own beyond mere imitation. For release purposes, The Encounter is split into 10 “song” sections although it is strongly suggested to listen to it in one session as it was intended when being created.

“Having played in various metal bands before, we were kind of drawn to modern jazz and fusion records at the time and wanted to challenge ourselves with a more complex and improvisational approach to music. Of course, being the metal kids that we are, we couldn´t totally hide from our roots, but overall we tried to emphasize extended harmonic concepts and recurring rhythmic motives common to a Jazz/Fusion context.
After months of sharing ideas between ourselves and also our friend and producer Tom, Marte composed a rough ‘skeleton’ of the track that featured the basic rhythmic patterns and chord changes as a building block for further soloing and improvisation.

Lille Gruber, one of our “metal-friends” that also has a soft-spot for jazz-related music, was asked to join on drums for the recording session. After we practiced the material together for a couple of months, the drums were tracked at Tonbrauerei in Berlin in two days, January 2018. For the fusion-parts especially, Lille went for long improvised takes over the chord changes of the different sections and then we picked a favorite. Those drum tracks then formed the basis for Marte and Clemens to overdub guitars, synthesizer and bass – prewritten for the metal parts, (semi-)improvised in the fusion sections.
We decided to add the specific vocal concept only after the music was basically finished so we had a clear picture to build lyrics upon. Dan´s vocal style seemed to fit the final concept very well and we asked him to session the job.”