Gina Carano was fired for being a moron, not just a Republican 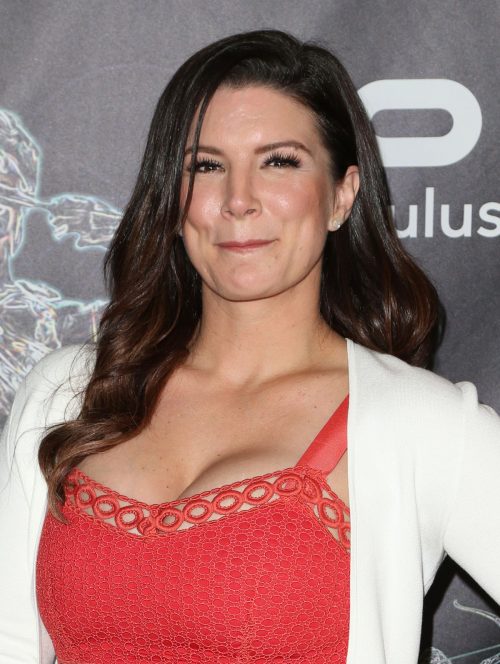 Talking Star Wars today because I am a giant Star Wars nerd and because this topic overlaps with a few things I also need to educate some of you moronic Iced Earth apologists for Jon’s coup attempt antics on.

If there was a complete “war on Republicans” being hired I am pretty sure Disney+ would have never hired Gina Carano in the first place for two seasons on one of the biggest buzzed about tv shows of all time. The former (haha) Mandalorian star was dropped for her comments online comparing Republicans being rightfully critiqued for enabling the white supremacist coup attempt of Donald Trump and cronies to the plight of Jews in the fucking Holocaust. Her post (which I am not including) argued that the government made them hate their neighbors, similar to now. It also included it was not Nazis that hurt Jews in the streets but their neighbors, a point skipped right over by morons like Paul Joseph Watson and Jack Posobiec. Go kiss up to Billy Corgan some more, Jack. Or maybe not because I love The Smashing Pumpkins and it was miserably depressing when Billy went on Alex Jones. We don’t need that shit again, especially with the art of the new SP record looking like Italian Futurism.

It is not “the government” making people dislike the GOP now and nothing they are enduring is comparable to the lead up to the Holocaust. People dislike the GOP because of their own choices and bedfellows. It’s not a smear campaign or remotely like Hitler spreading xenophobia to criticize the party Gina ignores the glaring wrongheadedness and bigotry of.

Gina was fired for being a moron, not “just” being a Republican. Personally, I think all Republicans are ahistorical morons who ignore the Southern Strategy while saying their party aren’t racist and that Trump was better for blacks than anyone and who still think Trickle Down is great even as fifty year studies (and the memories of anyone who suffered under it) prove it only helps create Robber Baron types. But these are not bright people. Trump is raising the rates at his hotel the day the Q morons think he is “coming back” in March and they STILL can’t see the fucking grift?!! LMAO.

I am sure Tucker Carlson is aching to book Gina on his show where he will most likely weaponize the identity politics he says he hates and paint her as a huge victim and a wronged woman dealt with harshly by “cancel culture”. Just stop. Gina, Ariel Pink and Tucker can re-evaluate their wack af public statements and allegiances as well as personal choices and then maybe come back to reality where private companies do not have to operate by giving you a free pass for whatever you do off camera or the recording booth.

Seriously, clowns need to chill. She actually got free passes already for transphobia, Covid denial and coup attempt disinformation, by my count. That seems like a lot of strikes for me for a sub par actress who could be replaced by a zillion other characters in the galaxy (the superior talents and actually decent and worthy humans Lucy Lawless and my favorite choice Lana Parrilla have both been mentioned by stans as possible actresses to recast Cara Dune with, if at all).

James Gunn got hired back because he was ACTUALLY apologetic for harm he had caused in the past and didn’t triple down on himself as a victim. Star Wars also is rightfully trying to do better by having more non-binary characters in canon or visibly gay characters like Sinjir Rath Velus and hopefully the tv shows moving forward with a diverse cast will make up for the poor handling of the Rose and Finn-era and their essential sidelining in The Rise Of Skywalker. Disney+ needs to give Boyega his own Finn series and fix the development arc of this awesome character who should be a full black Jedi pansexual poly king we need.

Tangent: I don’t mind that Poe and Finn or Rose and Finn or Rey and Finn didn’t end up together as much as I am annoyed they didn’t develop Finn’s force sensitivity plot fully. Jannah and Finn meeting and having some chemistry right away made me think about how as a former trooper super stoked to be free and allowed to not be a space fascist, Finn seemed like a super impressionable person who just “crushed” hard on everyone at first. Maybe he was polyamorous? I actually dug that he wasn’t firmly attached with someone – despite how cool the Poe/Finn ship is (my fave for him) – because it is also ok to not always be paired up in life and/or to be finding yourself. Or to just be friends and have found family. There are plenty of my friends who I have hooked up with before who I know would not be compatible in the long run, y’know?

Anyway, from mocking pronouns as unimportant to her unabashed pathetic inability to look inward at the real problem, Gina had to go. Star Wars is still trying to make up for some of the bad Asian and Jewish stereotypes in some of the prequel characters (Watto, for example). They aren’t probably keen on letting a moron like Gina run around and ruin some of the best goodwill Star Wars has had in ages.

Will Healy for The Motley Fool (not a Crüe fan blog, fyi) wrote recently: “Disney also faced a backlash as it filmed Mulan in the Chinese territory of Xinjiang, a site of alleged human rights abuses. ESPN management has come under fire in the past for discouraging staff from publicly discussing the NBA’s strained relationship with China stemming from comments about Hong Kong.”

The only FAIR Republican talking point I have seen come out of this whole shitshow is that Disney needs to stop pandering so much to Xi and China’s market if they care about human rights abuses, since they literally have huge re-education camps there for Uighur Muslims.  That should not be allowed to become just a right wing talking point. Leftists often like to pivot to ICE detention in the USA if you bring it up. Guess what?! Both are fucking bad! That is reality. I felt the same way about Taylor Swift headlining Alibaba Singles Day during the Hong Kong democracy protests or her headlining Amazon Prime Day with Dua Lipa during a worker’s strike.

I don’t think Western culture by any means should have zero involvement with China like we are only “good guys”, but there has to be some ethical stance-taking when there are concentration camps involved. Just like Amazon needed to be called out by the No Music For ICE movement.

The Chinese government has imprisoned more than one million people since 2017 and subjected those not detained to intense surveillance, religious restrictions, and forced sterilizations. Tankies like to downplay that shit and also pretend Mao was great (he sucked ass and was a monster and so was Stalin, sorry losers). I am a very progressive demiflux metalhead who supports Antifa and I can still point out reality and not cape for every communist dictator or authoritarian just because of some alleged overlap. I want social democracy, not gaslighting.

So yeah, I think Disney is not going away but must be engaged with. Return Of The Jedi is intrinsically tied to my memories of my dad and me and so I will fight hard to try and get the company to do better. Which in a tiny way it just did.

So yeah…bye, Gina. Bye Ariel. Hopefully Trump, Tucker, Hannity and all the other self-aggrandizing pieces of shit will be out of our faces soon as well. While there must be balance to the Force, there is no balance in allowing disinformation to run out of control and unchallenged. This is the way.