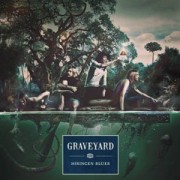 “Hisingen Blues” was produced, recorded, and mixed in 100% analog by Don Alsterberg (Gonzales, Junip, Soundtrack Of Our Lives, The International Noise Conspiracy) at Don Pierre Studios in Gothenburg, Sweden.

Graveyard is also confirmed to play at this year’s Bonnaroo Music & Arts Festival the weekend of June 9 – 12 in Manchester, Tennessee. And don’t forget to check out the video for the title track – directed by Artur Wolgers of STLSKR and produced by STLSKR (and keep an eye out for an original Black Sabbath Master Of Reality-era poster from 1971!) Watch it here.