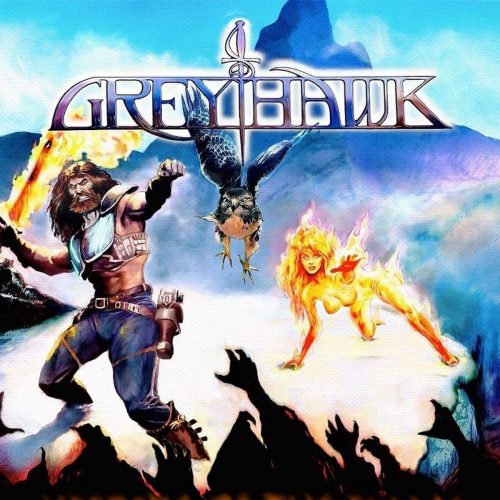 GREYHAWK are a band you should already know about as a metal fan. Keepers Of The Flame has some of the most anthemic and sing-a-long-able heavy metal/power metal hybrid tracks on it and was one of the better records of 2020. Hammerfall, Stratovarius or Helloween fans, for example, would eat this group up. The solos, the unison rhythmic power, the sturdy metal celebrating vocals and strong, melodic epic feel…this band gets it AND have a great name.

Today’s news concerns the band’s bassist stopping a nearly active shooter, however. The Idaho Statesman has the details HERE, but suffice to say we are glad Darin Wall is ok and was able to contain a potentially more deadly situation at The Shredder venue by confronting a sketchy dude. Wall took a bullet in the leg for his efforts and is recovering from the gunshot.

Darin, you are more valiant than the beefy sword dude on your band’s album cover!

The band’s statement is below:

Friends,
As you may have heard, there was an incident after our show at The Shredder in Boise last night. Our bassist Darin was shot in the upper leg while confronting a belligerent armed individual who was threatening concertgoers and band members outside the venue. Darin’s injury is thankfully not life-threatening, and after a night in the hospital and a long day of travel, he is safe at home in Seattle, resting and beginning his recovery. The shooter is in custody, awaiting arraignment on multiple felony assault charges. We are rattled and exhausted, but grateful to be alive and breathing! If it were not for quick thinking on the part of Darin and others on the scene, it is very possible that lives would have been lost.
Thanks so much to all of you who have already reached out in support of Darin, and special thanks also to the Boise Police Department, the staff at St. Alphonsus Medical Center, and the community members who stepped up and offered their help.
We want to emphasize that the shooter was not in attendance at the gig, and as far as we know has no connection to the Boise metal scene. We now know this individual was harassing and threatening people elsewhere in the city earlier in the night, and it seems clear that he was cruising for trouble more or less at random. We won’t let this incident overshadow our overwhelmingly positive experience of this venue and Idaho’s heavy metal community as a whole. We eagerly await the opportunity to return to Boise and rock The Shredder again!
Love and steel,
Greyhawk