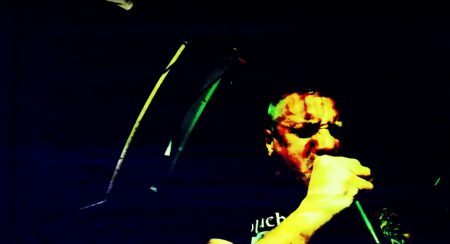 New York City-area powerdementia faction GRIDFAILURE has completed a new video for “Sew Nothing, Reap Nothingness,” while many other new recordings and projects are nearing completion for release in 2018.

“Sew Nothing, Reap Nothingness” is found on GRIDFAILURE’s I Shall Not Survive Another Winter, which was independently released on the Autumnal Equinox. Each song on I Shall Not Survive Another Winter grows longer than the one preceding it, the record exploring a vision of Post-Sixth Mass-Extinction Skullduggery which is the concept of the upcoming Teeth Collection and Drought Stick albums, portraying a grim vision of humanity’s future. A nearby reality where those who have survived mankind’s override by artificial intelligence, the ecological rebellion of our planet, and thermonuclear warfare amidst our own kind strive to rebuild society, and are continually thwarted.

Find I Shall Not Survive Another Winter as well as the Halloween-released When The Lights Go Out Vol. I – which is still available for free download – at GRIDFAILURE’s Bandcamp at THIS LOCATION.

With multiple new full-length titles, EPs, videos, and other projects in the works, GRIDAILURE is also heavily immersed in fully cooperative albums with a wide array of artists. The second collaborative album with Brooklyn experimentalist MEGALOPHOBE and a collaborative EP with upstate New York anti-folk/punk act WALKING BOMBS are both halfway completed. A collaborative EP with FYRHTU, a new project formed by Leila Abdul-Rauf (Vastum, Ionophore, Cardinal Wyrm) and Nathan A. Verrill (Cardinal Wyrm), is well underway, and a fully audio/visual collaborative release with PORNOHELMUT – the side project of Neil Barrett of Austin-based experimental/grind metal act Blk Ops and Novel Concept TV – is currently under construction.

More On: xx No Genre xx, Recording, Gridfailure, The Compound
share on: