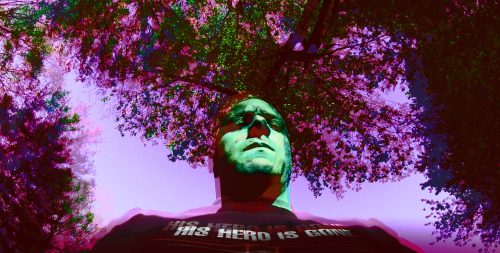 Gridfailure‘s Scathed will see free digital download and handmade CDR through Minneapolis-based Darker Days Ahead on June 2nd. The newest from increasingly prolific NY based mind churner Dave Brenner finds our anti-hero composing what have been referred to as ,“ten unpredictable and defeating new anthems for hallucinogenic seppuku.”

Now, far be it from me to ever agree with anyone, but yeah. That’s pretty spot. My favorite track off Scathed is “Gaze Of Aversion”, a very compelling and trippy, minimal bass and cold sound wash paired with some harsh vocals for a very accomplished sense of aesthetic. It’s both relaxing in spacious scope yet borders on frozen indie-dub picked up instead of a sonar ping to lure people to a yellow submarine that is only yellow because of a portal to a sewer full of screaming crust zombies fighting Sean Connery and the Ninja Turtles. Ok, so I was doing ok there, but…yeah this shit will zone you out. Imagine earlier Drug Honkey or Scorn’s “Silver Rain Fell” wash if slowed to a crawl and panned way out to the astral plane on some LegionFX shit. I also really wanted to make a Hunt For Red October reference. We don’t want to actually encourage Dave to make more music, because while it is dope. we can’t possibly grasp his current productivity levels – since every song seems like such a fully realized little world of chaos, disorder or deceptive calm.

Scathed comes hot on the heels of the fascinating Dendritic, a pairing of Gridfailure and Megalophobe. Numerous other things are also in the works and recent courses already charted with various other off grid collaborators, but Scathed marks Brenner attacking every strange twist and turn collaborator free.

Darker Days Ahead also recently issued the diverse Death Season Six compilation which features GRIDFAILURE’s “Shallow Epicenter,” as well as contributions from Never Presence Forever, Megalophobe, Cory Schumacher, Dusthallowed, Teeth Engraved With The Names Of The Dead, and many others. Download the album for free and buy the limited CD HERE.

Until next time, remember as you sink into the depths that the hard part about playing chicken is knowin’ when to flinch. May we meet again in Havanna where the sun is warm and so is the comradeship.

More On: Glam Metal, Release, Gridfailure, The Compound
share on: