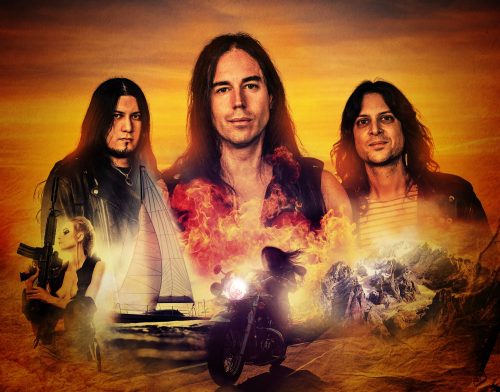 The metal and hardcore world is still bummed from the break-up of ETID (rightfully so) and there are always a slew of tour announcements I could post or some grumpy tough guy face shit. Heck, both Dead Lord and I think Caliban have releases called Dystopia coming out, even though it is already an Iced Earth AND Megadeth album, lol…but whatever. So how about instead we talk about something fucking FUN today?!! I for one don’t feel like taking anything that seriously in metal right now after how shitty the world has been for awhile.

THUNDEROR are a semi-ridiculous yet awesome Canadian synth drenched NWOTHM/AOR hybrid and TRIO featuring alumni of Skull Fist and Operus. No, they have not made a Manowar style Modest Mouse cover song with new single “Fire It Up”. Today the band release their OWN song called “Fire It Up”. Let’s face it…it isn’t the most shockingly original song title. But then again the theme is universal! And anyway Modest Mouse just criminally ripped off Soft Kill’s whole album concept for a half ass music video, so they can’t point fingers anyway.

Anyway, Thunderor features Skull Fist members and DO manage to rock in a synthtastic and fun, motorcycle metal manner. And singing drummers always is a gutsy move, but perhaps better than yet another annoying frontperson. And points for multi-tasking! Some catchy high vocals as well!

JJ Tartaglia explains in further detail:
​
​“It’s the title track from the record, so it’s the perfect one to release as a single. If you pay attention you’ll notice there are actually two different choruses that happen back-to-back throughout the song, so no shortage of hooks! The song is for those who feel a longing for escape; you can cure that with motorcycles and romance.”

Indeed, someone reward these heroes with lots of action babes, explosions and some metal trophies!

What next? Pre order this bad boy HERE, of course! Fire It Up comes out on February 25th, 2022 via Boonsdale Records.

Maybe we will have to wait until after that to get THUNDEROR to write a “Thuderorstruck” or cover Imagine Dragons and chant their own band name awkwardly instead of “Thunder”.