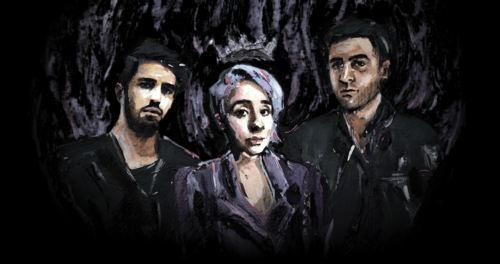 Iran’s Heterochrome has a new album From the Ashes coming out this spring and the second single to entice listeners is the heavy “Badbadak (The Flight)”. Somber and driving in both topic and music, the single revisits the 2020 tragedy of flight 752. The band explains further:

“January of 2020 marked the tragedy of the Iranian Government shooting down the Ukrainian passenger airplane killing many of our loved ones including one of Mida’s old schoolmates. In the grief following that loss, Mida drew from an old school song called Badbadak (The Kite) and wrote this song. The music video represents the same suffering.”

The visually striking video was created by Mani Zonoozi who made it in a small aquarium with underwater equipment in the USA. It also features shots from Mida and Arash recorded in Canada and Finland.

The single and video for “Badbadak (The Flight)” can be heard at https://youtu.be/Ce1pjpfvWvE​

This is not the only song on the album to deal with dark subject matters, as a whole, it is a much deeper dive into the personal experiences of the band members than their debut. They hope that the fans appreciate the new path they are taking, and connect with the songs on the same personal level as them. Written as a concept album, each track forms a small part of a bigger picture, and while each serving is a unique story on its own the album has been tailored to be enjoyed as a whole.

Heterochrome started out with a melodic and emotional progressive sound, however over time they started to experiment with the alternative, electronic, and nu-metal genres as well, trying to find a balance to perfectly capture the essence of their sound between those styles and traditional Persian music. They are recommended listening for fans of Porcupine Tree, Gojira, and Draconian.