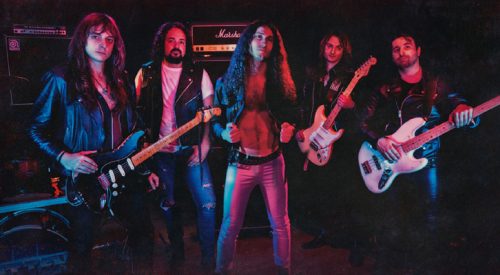 Powerful 80’s influenced band HITTEN are a great hard rock act from Europe with a huge sound fans of Queensryche, Ratt or Scorpions will love. The band has a new album due this November!

The band comments: “After what we all have experienced in 2020 it feels great and gratifying to finally be able to show you ‘Eyes Never Lie’, the first single of our upcoming new album ‘Triumph & Tragedy‘. We have been working all the last year on every detail of this record. It represents a whole new step into the band sound and we really can not feel more proud of the final result. For the mix process we have joined forces again with Javier Félez from Moontower Studios who did an outstanding mix job followed by the great mastering job of Patrick W Engel (Temple of Disharmony). ‘Eyes Never Lie’ sums up pretty well what you will find in the whole record: big drum sound, heartbeat bass lines, great guitar riffs and solos by the ‘Terror Twins’, all spiced up with stunning vocal melodies.”

The cover artwork was created by Marc Schoenbach (Sadistart Designs) and the back cover and booklet graphics have been made by Dani Meseguer (Bloodyart Designs).

Meant To Be Mean

Ride Out The Storm

Core Of The Flame

Light Beyond The Darkness