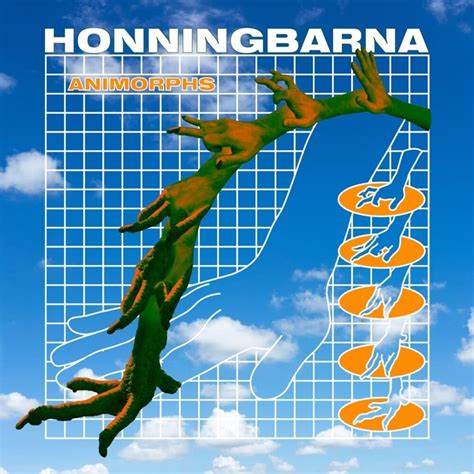 Every time I listen to Honningbarna’s music, the idea of pure chaos and danger that transcends boundaries of time and space always crosses my mind. It’s as if they were trying to save the world and have fun at the same time while making some dangerous music. On this sixth studio album of theirs, Animorphs, they perfectly manifested their own pure breed of chaos in a form of twelve tracks. The exciting kind of chaos that brings the adrenaline within you.

My first encounter with this Kristiansand-hailing punk band began through the discovery of the song “Noen å Hate” which is actually a Raga Rockers cover. Ever since then, I instantly fell in love with the abrasive sounds they presented and the revolutionary political statements they tried to convey. I began discovering their whole discography and found out that Voldelig Lyd is my all-time favorite album of theirs, followed by Verden er enkel. I have never stopped profoundly loving their sounds with all my heart ever since, as every single song of theirs helped me through hard times and holds personal meanings to me. The themes of Honningbarna’s songs so far may vary, ranging from metaphors regarding Icarus, artificial intelligences and Übermensch, to acts of revolt against the bourgeoisie.

Animorphs, with its Cyberpunk-esque cover art, is the first Honningbarna album with a new lineup consisting of (as usual) Edvard Valberg on vocals, Christoffer Traedal on guitars, Nils Jørgen Nilsen on drums, and (the newly joined) Tomas Berglund on bass and Johan Hansson Liljeberg on guitars. With the new two members being of Swedish origins, safe to say that Honningbarna has become some sort of a Swedish-Norwegian punk union. I’ve always perceived Honningbarna as the Refused of Norway, so this fact is kind of funny to me. Edvard Valberg’s stage acts and energy have always reminded me of Dennis Lyxzen.

On the album Animorphs, the musicality being presented here is very diverse and versatile. Unlike their previous albums that depended mainly on typical punk/rock instruments, this album used more synths, such as on the opening track “Animorphs” and that makes it even more eclectic. They also managed to present several catchy songs with indie rock-like elements such as “Åh Bliss” and “En av oss er idiot”, that would remind its listeners to the likes of Hvitmalt Gjerde and/or Brenn. There’s also a track that reminds me of midwest emo elements, as if it’s coming straight from Run for Cover records, which is “Når alt det treffer oss”. On the other side, there are also tracks that stay intact to Honningbarna’s punk roots such as “Passasjer”, “Jeg har lyst”, and “Mitt hus”. But on top of all, the track that I find most captivating is the closing track “Ække noe kirke” because it contains blackgaze/post-metal-esque elements, just like Deafheaven, and I’m a sucker for blackgaze and post-metal most of the time. The blast beats they presented on that closing track are just captivating.

The sonic versatility of Animorphs has proven me that they are indeed one of the most eclectic bands I have ever come across. If you have time, please also do check drummer Nils Jørgen Nilsen’s side project, the Bergen-based punk/rock unit called Svenske Tilstander. Similar upbeat catchiness and aggressions as Honningbarna’s