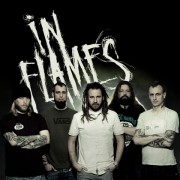 The band has just finished recording “Sounds of a Playground Fading”, their tenth full-length studio album which is scheduled to be available through Nuclear Blast this coming May/June. In Flames also has a busy summer ahead as they are appearing at Rock Am Ring and Rock Im Park festivals in Nurburgring, Germany, Nova Rock in Austria and, Sonisphere Festival in Knebworth, UK.