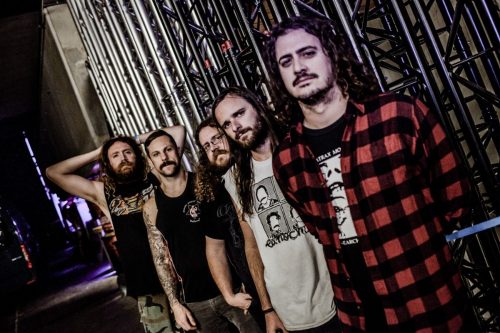 Hey everyone. I am feeling pretty emotionally drained after having to explain to cis people what I mean by “demiflux” as if I am an alien. Very thankful for Daniel Radcliffe speaking out against JK Rowling’s transphobic problem spots. No one is trying to “erase” cis people. That is stupid. I also can’t fathom how JK Rowling could invent the Obscurial with all the horrible repression that goes with that dark cloud of energy and have the part PLAYED by a real life enby and still not see the irony of her own phobias. Everyone PLEASE read this Scientific American article again.

Anyway, mighty INTER ARMA have a bad ass new cover of “March Of The Pigs” out and it is just what the doctor ordered. Head here to pick up new covers record Garbers Days Revisited.

INTER ARMA Comments:
“Hi. We released our cover of Nine Inch Nails’ March of the Pigs this past Tuesday, but felt it would have been inappropriate to latch onto the outrage we’re all experiencing to promote a cover album, even if by happenstance. If you want to hear it, it’s out there. In the meantime, we suggest that you continue to fight against police brutality and institutionalized racism however you can. It’s working. If you’ve got the means, please consider giving a few or a lot of dollars to the Richmond Community Bail Fund and/or BEAM (Black Emotional And Mental Health). Links below. Black Lives Matter.
Thanks.
https://www.beam.community/donation
https://rvabailfund.org/donate”