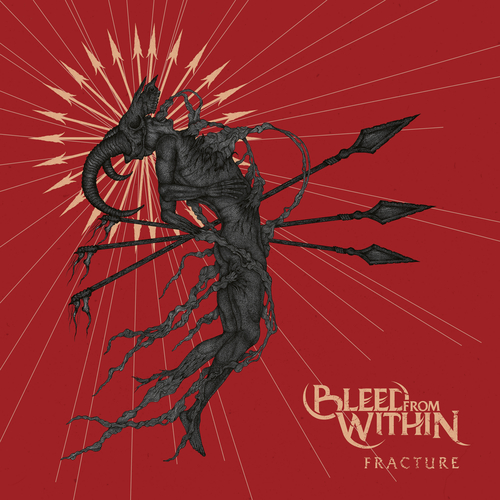 Bleed From Within have built upon their humble origins with each release, nowadays a powerhouse of kinetic energy and irresistible groove heavy metalcore that draws as much from NWOAHM as deathcore. Fifth album (!) Fracture is their most cohesive release yet and the metalcore standout release thus far in 2020. It is certainly an album that ought to generate a lot of excitement.

A few weeks ago I sent questions to the Scottish band’s own Steven Jones who shares thoughts about recent global events, the new album and more! Be sure also to join the ambitious group on Facebook this Friday from 7pm BST as they go live, discussing all things Fracture listening to the album, and answering your questions!

First off, the whole album is great but I really liked “Pathfinder”. One of the most effective and emotional metalcore songs I have heard yet this year. How was it tracking this album and did it take awhile to capture the energy this well?

Steven Jones: I love the final mix on here for how well it balances different elements while still being super heavy. Thanks! “Pathfinder” is also a favourite of mine. Tracking this album was actually a pretty stressful time in comparison to Era. We gave ourselves a really tight deadline for recording and writing in order to take full advantage of the amazing year that 2020 was already shaping up to be. Shame that didn’t work out, eh? Haha. I definitely think you can feel the urgency across the album, but in a positive way. Even though we were quick to write and record these songs, we certainly didn’t slack with the songwriting and didn’t rush ourselves too much. We still took the time to ensure we were happy with everything on the record, as each song is a reflection of us as people and will exist forever. We are aware of that and, at all times, strive to write the best music we can and perform it as best we can on record!

How is the band coping during this scary time for the world? Any message to your fans?

SJ: We are all coping well. Fortunately, we are mostly self-employed within the music industry. Goonzi, Scott and Davie P all do lyric videos and graphics for a living. They are actually being kept very busy right now and life at home with their girlfriends is comfortable. It’s a nice chance for all of us to refresh after such a busy period over the last few years, touring and writing like mad, even though we all want to be back out there more than anything. I’m keeping busy with music production and mixing, which is my job on the side of the band. I’m fortunate to have clients still working on music during this and appreciative for that. Ali works at Allotment productions, who is still shipping merch (incl. our new album pre-orders). This would be a good time to say a massive thank you to all music fans, who are digging into their pockets currently to keep bands afloat. We know it’s a tough time for everyone and we appreciate every penny that helps sustain our band more than you know!

How did you decide on the title of Fracture and the cover image? It reminds me of how people throw stones or shoot arrows from everywhere but can also be vulnerable themselves. “Into Nothing” also obviously seems to comment on mortality and human will and ego.

SJ: Fracture was the last album name we came up with, having initially been rolling with Emerge for a few months. When it came to crunch time, and a final decision had to be made, the title-track Fracture was one which we all felt particularly fond of. Lyrically, thematically, and visually, we thought the name best captured what we wanted to achieve with this album. We are putting the past behind us and in spite of all hardships we’ve had to overcome on our way to this point. We are finally saying fuck it and doing what we want to, making exactly the music we want to, playing the shows that we want to, and taking this band forward with no end in sight. The artwork itself is a visual representation of being suspended in that moment, a point in time where you bear the wounds of that which came before you. There is undeniable strength in this. 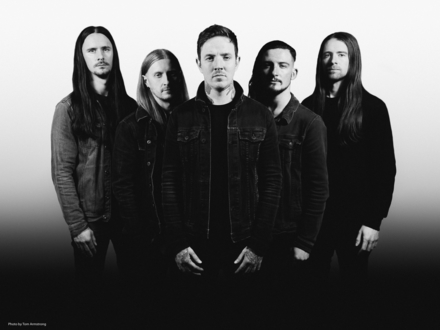 Your band name seems like it could also reflect sometimes how humanity or countries have a tendency to keep up appearances on the outside while we still could be suffering from problems. Any thoughts on that?

SJ: The band name was something the original members came up with a long, long time ago with no particular intention or desire to reflect on anything in particular, I don’t think. However, I like that you’re thinking about it and looking into it more. I’d like to think that our name, image and the themes we discuss in our music will allow people to engage with reality and the world that we live in!

How does it feel as a band to have reached your fifth album? Also, I imagine Steven that you feel a little more settled into the band at this point on this record? Also, wow the title track is heavy as hell! Parkway and Korn need to take you guys out when gigs exist safely again, haha.

SJ: I am very settled now. With Era, there were a few eggshells to walk on but now I definitely feel the guys have embraced me fully. This feels like my band going forward. I genuinely don’t think I could be more ingrained at this point. It feels like we’ve been this group forever.

This record feels like it could really help people through some depression. I mean that as a big compliment. I hear the hope for strength in some of the material like “Nightcrossing” or “Ascend”. I feel like when I discovered bands like Hatebreed or Unearth and initially became a fan that those records made me feel like the band really wanted the best for their fans and listening to this record it feels like you want to motivate others, even through anger.

SJ: I’m glad to hear that. This record was made during a very turbulent time in my life and I know for at least one of the other guys too. Life isn’t always plain-sailing and I felt that while making this album. I’m glad that it translates in the music. It’s important for us to come together and have something to rally around in time’s of need, and to find strength where we can. If anyone can find that solace in this album, I will consider my purpose fulfilled. The songs that have a particular impact on me lyrically and that take me back to that time and give me clarity, understanding, and hope for the future, are “Fracture” and particularly “A Depth That No One Dares”. These songs very clearly touch on one’s personal struggles and offer insight to the listener. I hope this will resonate with people who are in need.

What were some of the biggest risks you feel you took as a band with this release and were maybe some of the influences behind the record? Could be an event or records or whatever comes to mind?

SJ: The biggest risk for us was definitely the clean vocals in “The End Of All We Know”. There was a definite tension within the group about unveiling our first song with a full clean singing section, as it was something we had never done before. We all had faith in the song; what we had made, and we love it. That’s all that matters to us. The risk ended up paying off, and “The End of All We Know” has undeniably been our most successful release to date. We’re glad to have opened up this avenue to explore and experiment more with clean vocals and sing-a-longs. It allows for more dynamic in our songwriting and is a powerful tool we now have moving forward.

Yeah, I mean, look at Veil Of Maya. It opened up so many possibilities for them. So, this is certainly a time to count blessings in our lives. In America where I am it feels disgusting to me how so many people have died and some people are acting like it isn’t a big deal. It’s fucking horrific. But honestly what about your own lives or your own immediate communities where you all live are you thankful for? I feel like my Upstate, NY town has had a lot of good online communication of people sharing healthy farm food resources and health resource updates, etc. I keep finding myself thankful for old memories of concerts from YEARS ago or people from my many times in my life flashing through my head. It’s emotional. How about you?

SJ: During isolation, there is a lot of time to reflect. I think for some people it can be a force of positivity. However, not all are so lucky. I think it’s very important to check in regularly on people who you know are struggling and people who you suspect may be struggling during this time. I’m sure it’s also a massive opportunity for creatives across the world to lock themselves away and make new things. I hope everyone is taking advantage of it! We may never have so much spare time in our lives again. RE: the current political situation, the UK and America are certainly examples of how not to deal with the situation, I would suggest. Skyrocketing death tolls, political leaders who aren’t worth the dirt on their shoe. I hope the people of the world will see these people for what they are on the flipside of this and finally make a positive change. Too long have we lifted leaders into positions of power willingly just for them to abuse the power and lose sight of why these positions exist in the first place. We can do better. We need to do better.

Thanks for the questions Morgan! Great interview to complete. Glad you enjoyed the record and hope you stay safe during the current situation!

More On: Metalcore, Exclusive, Bleed From Within, Century Media
share on: