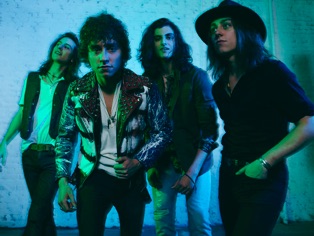 Let’s imagine no one had heard your band before and you, well…there are obvious classic rock influences, but you do a great job. But how would you want them to fall in love with your own band’s story?

JAKE KISZKA:  The only thing we’d ask of people who have never heard us before is to just give our music a listen, hear one song, two songs, give it some attention and then decide for themselves if they’ve ‘fallen in love’ with us or not.  We really have no preconceived idea of the experience we want people to have – that belongs to the individual.  Hopefully people will find something in our music that they like.

How did this band come about? Were you all experienced players or was there a varied level of experience? You sound more like you came out of 70’s England than, say, Detroit. But certainly the rock n’ roll heart is beating within the band.

JOSH KISZKA:  We’ve been surrounded by music all of our lives.  Our father and grandfather were both musically inclined, and our parents had a large collection of vinyl, so we had easy access to music at a young age.  I’ve always loved telling stories, exploring subjects like humanity, who we are, where we’re going, and I’ve found that one of the ways I could express that was with my voice. Our parents encouraged us to delve deeper, to better understand the instruments we played.

JAKE:  Our parents had instruments all over the house and we’d pick them up and start to play.  One day my dad bought me this plastic guitar and told me if I learned to play a certain number of songs on it, or as soon as I could play Bob Seger’s ‘Night Moves,’ or Hendrix’s ‘Wild Thing,” or ‘Hey Joe,’ then he’d get me that electric guitar I had my sights on.  He was always challenging us like that, but I finally learned all of those songs and got my first red Fender Squire and a 20-watt Marshall amp.

JOSH:  Jake started jamming in our garage with a drummer friend from school, and eventually Sam and I joined in.  Then Daniel Wagner, our current drummer, came on board about a year later.  We haven’t stopped since. 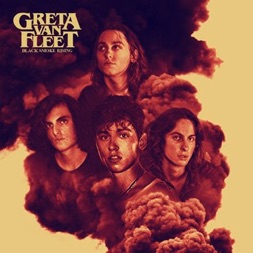 Do you feel like your band is made for more large festival stages or sweaty rock clubs?

JAKE:  We enjoy playing both and think our music is suited for either type of venue.  Our music is loud, the songs were written to be played loud.  We’ve actually been asked to turn the volume down when we’ve played small clubs, so playing at bigger venues is probably more in line with the music we perform and how we play it.  Good volume equals good tone.  But, it’s a personal experience when we play a small club, there’s more of a relationship we share with the audience. Everyone is in harmony, sharing the energy of the room. It’s more intense and intimate.

How’d you connect with Lava/Republic? That’s some solid support!

JOSH:  It was a series of individuals involved with the upward passing of our work, and eventually, our music landed in the hands Jason Flom, the president of Lava Records.  He liked what he heard and called our manager the day after hearing the material and offered us a deal.

Is it interesting to you how maybe people see your image and think,” oh, another bunch of sorta retro long hairs with pretty faces,” haha…but then it seems like when people hear you they are pretty regularly blown away from all the research I have done on the band. That has to feel pretty good, right?

JOSH:  I know it can be relatively difficult at times to avoid stereotypes pertaining to one’s image.  You don’t go to an art gallery to listen to the painting, just as you don’t go to a concert to just stand there and watch a performance.  We want people to connect with the music, no matter what kind of clothes we wear or how long our hair is.  It may sound trite, but for us, it really is all about the music.

Do your thing, man. How long did it take to write and record Black Smoke Rising?

JOSH:  We’ve been writing and recording for the past five years. When we signed with Lava, we’d already had quite a repertoire to draw from, so we hand-picked the four songs that would end up on the EP.  We wanted material that would fit together, be a cohesive collection and give the EP its overall sound. We went into Rustbelt Studios in Detroit with Al Sutton and Marlon Young in 2016 and made the final recordings over the course of three days.

DO you like to have fun or feel like it is more important not to make the same mistakes as the legends, haha? I mean, it isn’t like everyone has the money to drive cars into swimming-pools or get girls to have sex with an octopus and crazy shit like that anyway. I think most bands just want to be able to say on the road these days, haha.

JAKE:  We’ve taken into great consideration the lessons of history, this, every member of the band can attest to. However, we like to walk the fine line out on the edge, if you know what I mean. For instance, when Keith Moon allegedly drove a Rolls Royce into a swimming-pool in 1967 here in Flint, Michigan, that was genius work!

Haha. I think a major mistake radio made was turning so many radio stations over to just pop and hip hop or pop country when that was hitting or safer. I mean, sure…you can make some money but it was also at the expense of the grand tradition of rock n roll. Whereas if you leave room and support for everything maybe the industry wouldn’t be suffering so much. If you put all your eggs in one basket or two and don’t keep structure intact, you will never whether changing climates. Thoughts?

JOSH:  This gets very philosophical and I believe there is certain merit to this theory, but we all feel a real change is coming, that there will be, once again, more space for rock music on the air.  There’s a subtle turning over of the reigns to the next generation, OUR generation, it’s a revolution led by the bands that seek to change the landscape of radio.  Rock and roll will play a large part in the re-invigoration of radio and the music industry as a whole.  We’ve met some visionary people involved with the radio industry, who have a deep love for all genres of music and would like to see the return of more all-inclusive, free-form playlists. Our personal playlists range from The Who to Crosby, Stills, Nash & Young, from Wilson Pickett to the Yardbirds, from Muddy Waters to Jimi Hendrix – how great would it be to hear that range of music on commercial radio?  Music is about truth, and you cannot manufacture the truth.

I hope you are correct. I know radio has been sniffing around the band Blacktop Mojo, for instance,  who are working hard like you guys. Hopefully you all get support. Any bands you would really like to tour with? I’d love to see you with Kula Shaker or, say, Electric Citizen or Chris Robinson Brotherhood. You have some range of who you can play with.

We’d love to tour with artists whose music ours would compliment.  There are a lot of artists who we respect and would love to tour with, such as, The Fleet Foxes or Coldplay, artists who could put us in front of huge audiences, giving our music a much larger and varied reach.  There are spiritual and philosophical expressions in our work – the lyrics for the song ‘Black Smoke Rising’ are a reflection on the lessons of history and that man does not always learn from the lessons of history; The wars and tyrants of ages past and the innocent victims of blind hatred ultimately have us begging the question, “What is the meaning behind all this?” The song is a reaction to these themes, and in a more positive light, embodies a unity of humanity, as an example – so, we’d love to have the chance to tour with bands who are vocal about what they believe.