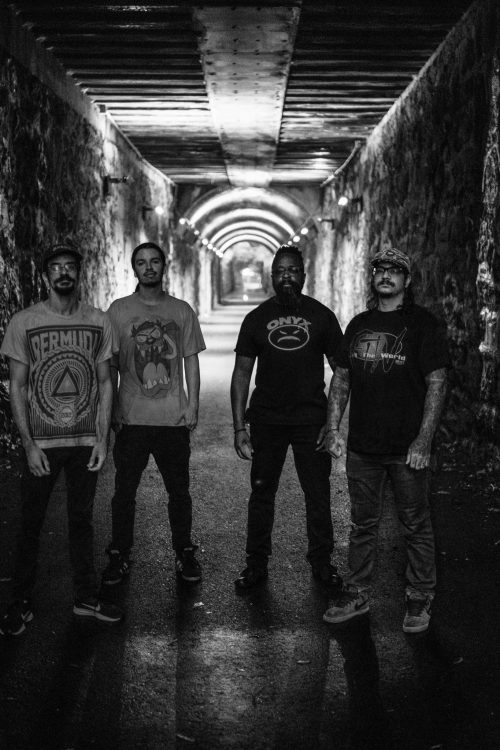 ‘Each song is teeming with rancor and a profound disgust with the things we see happening every day in the world, in the news, in our cities, in our backyards… the title, Detest is violently appropriate for the mood of this EP. Music is art and art has always been a non-bastardized, unfiltered version of history as told through those who lived it in their own words.’ – Matthew (vox)

Hell’s Teeth have made an explosive statement on their new DETEST EP. This metallic hardcore infused deadly extreme metal band could be huge if they get the right support, but either way they will make powerful and corrosive, heavy art. Fans of everyone from Power Trip to The Black Dahlia Murder to Turmoil to Baptists could hang hard with this release. Honestly though, with a band this legit and driven it is lazy to simply compile easy ‘sounds a little like sometimes’ points. You’d be selling yourself and the band very short if you didn’t hear their original vision for yourself free from bias.

Made up of scene die hards from the Hudson Valley area, Hell’s Teeth are just the shot in the arm the scene could use to keep things enthusiastic, no bullshit and venomous. I spoke to some of the band about this exciting release, tracked by Sean Paul Pillsworth (of Nightmares For A Week, The Inevitables) at Nada Recording Studio in beautiful Montgomery, NY. You wouldn’t believe such a serene setting could produce a recording this hostile!

How are you today? Very impressed by the Detest EP. I think it is a great further introduction for people to the marvel of intensity that is Hell’s Teeth. Was this recording prompted by getting a new drummer or were you already planning on tracking new material?

Lionel: Doing quite well, friend. I hope you can say the same. Happy to hear you are digging Detest.

The last ten months have been quite transformative for us as a band. We were fortunate enough to come to a collective epiphany at the end of 2019 that reinforced our core mission, message and execution. We entered 2020 with a firm idea of where we wanted to go creatively and how active we wanted to be as a band and committed ourselves to that end. As we started down that path, it started to become clear that a lineup shift would be necessary.

We are pretty much always writing so recording was already in the cards and not necessarily prompted by a new drummer.

The recording sounds phenomenal. Everything clear and audible but no compromise on the heavy side of things and the tones you got are remarkable. How was the studio experience? Was it hard navigating the recording process through Covid-19?

Lionel: Thank you! We’re quite happy with what we came out of Nada with. I’ve worked with Sean Paul Pillsworth on past projects and I cannot say enough GREAT things about him. He was a 100% focused on capturing our energy and he fully understood our “sound” from the beginning. Despite face coverings, the entire experience was relaxed and enjoyable (and I had an opportunity to catch up with John, which doesn’t happen frequently enough). New York going on punishment did slow down our preparation process, but overall, everything went quite smooth.

Quarantine, despite being pure shit, gave us a ridiculous amount of time to prepare that we probably wouldn’t have taken without King Cuomo’s decree. I don’t remember the last time I experimented with tone for four months, but by the time we walked into Nada, I knew exactly what I wanted to hear and how it needed to be executed.

The goal was to create a level of menace that could be “felt” as well as heard. I can’t tell you how many times I’ve seen metal guitarists rely on “popular” equipment as a means of developing the same sound as a thousand other knuckleheads. It’s sort of like buying the same sneakers or getting into the same trash because it’s “popular”. No one in this band has ever been about that and we do our best to make sure our sound AND music reflect our individuality.

That said, we were hell bent on funneling as much anxiety and rage into this EP as possible while maintaining a keen focus on “the arc”. With Nihilist, we delivered an amalgam of ideas representing rage, despair and dissolution. With Detest, you’ll find that we’ve simply removed our restraints.

Does the band write topics together as song themes or is that Matt’s domain, mainly? The EP title Detest could apply to a wide net of subjects. “Thoughts and Prayers” song title obviously could suggest current events. It is crazy to me that it took a pandemic to halt one of the worst climbing trajectories of school shootings ever.

Lionel: My role in Hell’s Teeth is quite different from what you’re accustomed to seeing/hearing from me. In Hell’s Teeth, I have an opportunity to communicate through my natural instrument (guitar) which, frankly, is a much more comfortable scenario for me. Because I have nothing but the utmost confidence in my bandmates (and HT is truly a collaborative experience), I don’t really get involved with the lyrics or cadence (unless I’ve been drinking too much on my couch late on a Friday night while watching teenage werewolf/vampire soap operas and/or anime with Dragged into Sunlight playing on my phone cause I’m stupid).

(Editor’s Note: That reminds me of the scene in Talladega Nights where John C. Reilly has the stereo on at the same time as the tv cuz he ‘likes to party’).

We’re all focused on many of the same topics and issues, so Matthew’s subject matter is typically spot on with what I/We have in mind throughout the writing process and he’s done nothing less than deliver the perfect narrative every step of the way.

Matthew: As you’re well aware the music of Hell’s Teeth is wrought with emotion and carries a particular tone that isn’t just heard but felt. Each member is a key ingredient to capturing that tone. I don’t take my part in this equation lightly. I don’t see myself as “that guy with the microphone”, but as a lyricist – as someone who has something to say, something with feeling, with meaning… which is often overlooked in this subculture of the music industry in lieu of defecating into a microphone solely for the sake of hyping up your boys. As a lyricist I feel that lyrics make or break a band. If your lyrics do not mean a thing, your band does not mean anything. This band is my most personal music endeavor. I am not only speaking from my chest, but I am speaking alongside the voices of the voiceless masses, amplifying the sounds of a generation of people who are fed up with the status quo and are literally out there in the streets, in front of police stations and court houses and capital buildings demanding changes.

Each song is teeming with rancor and a profound disgust with the things we see happening every day in the world, in the news, in our cities, in our backyards… the title, Detest is violently appropriate for the mood of this EP. Music is art and art has always been a non-bastardized, unfiltered version of history as told through those who lived it in their own words.

Thoughts & Prayers is simply my no-punches-pulled perspective on the boiler plate response that gets fired out in machine gun fashion by the folks who could effectuate changes that could prevent the necessity of these very same tweets – and we could argue all day long about exactly how that can be done but it all comes down to allocation of funds and where the money isn’t but ought to be going, hence the line “withering away as their capital gains, systemic plague – bad blood in their veins – killing in the name of those who enslave” because we are all slowly dying while living as a part of the same system we are waiting on being repaired.

How would you rate the experience of being in this band, not necessarily in contrast to past projects but rather your overall experience of being a lifer musician? How does it feel to have a project you are proud of at this stage of your life when you have miles under the belt, so to speak?

Lionel: Funny you should ask. I have been reflecting on my experiences over the last few decades, trying to figure out how I got “here” so quickly. I can recall a time when I could not legally drink, but I still found myself sitting at a stool at the Sturgeon (historic bar in downtown Kingston; closed sometime around 2002, I think) ecstatic about joining Slugworth. I recall telling Todd how happy I was to be in a band with him, but ultimately, I wanted to do something super heavy, pissed, cathartic, etc. At the end of the day, that desire is the thing that has kept me interested and productive.

I’ve been fortunate to be involved in multiple band, projects and “scenes” over the years, and while each one has had its own nuances (from playing to a room full of skinheads while in Crimelab to getting into DEEP debates with Albany and Massachusetts DM guys about which Brutal-Slam bands are as good as if not better than Prostitute Disfigurement to scratching my head at multiple generations of privileged dick-riders jockeying for “scene points”), I firmly believe that the majority of “us” truly just want to express ourselves through our natural language – music.

I’m a little freaked out about how much time has passed so quickly (and how little has changed in terms of cafeteria politics), but that shock doesn’t distract me from Hell’s Teeth and its place as the natural progression of how I’ve learned to express myself as a life-long musician.

Are you looking forward to playing shows again or trying to not think that far ahead with how uncertain things are?

What has been the biggest challenge for you mentally or emotionally during 2020?

Lionel: This year has been a fucking dumpster fire. I never imagined our shadow-masters dropping this many polarizing events on the species at once. Between racism, germaphobes, pedophilia, currency manipulation, the COVERAGE of existing violence, gentrification progressing to straight up colonization, murder-hornets, Clayton Bigsby dying from a new form of Cancer that apparently resembles COVID, Conway’s newest album, the new Six Feet Under single that dropped the other day, the completely delusional state most us of are living in (woke or otherwise)…I can tell you straight up, I believe we’re ALL living in an experiment designed to understand what happens to meat bags when cognitive dissonance is the norm.

The human experience has been one LONG snuff film. I’m just trying to find my safe word now. Is it banana? I always imagined it would be banana. Or sassafras…

My greatest challenge this year? Being human.