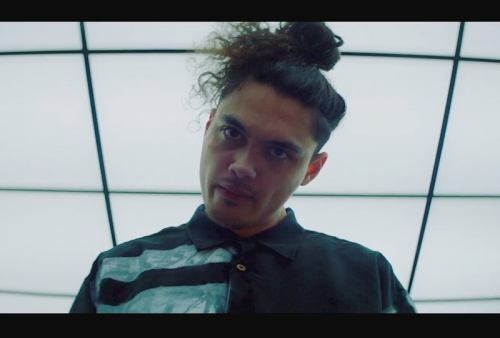 KILLVEIN is one of those inspiring rare types of artists who seem fueled by a frenzy to create, a high level of passion that palpable in the air like when you know there will be a storm soon. The self-taught producer and multi-instrumentalist charges up everything with purposeful intent and has released a lot of material the last few years, drawing from a diverse pool of sounds ranging from hooky trap to black metal to rock.

Recently Tommy Lee of Mötley Crüe fame was impressed enough by the up and coming artist to feature KILLVEIN on two tracks from the forthcoming Tommy Lee solo release ANDRO. I heard a rowdy rock cut. “Knock Me Down” is so ripe with pent up, ready for the mosh pit bravado that it is more closely resembles an explosion than a song (while still, in actuality, being a good song).

Read our chat with KILLVEIN below.

How have you been dealing with things during Covid-19? You seem like a really creative person. I know for myself after pent up a while I can’t help but write a butt ton of new songs, haha. Where do you live currently?

During covid-19 I’ve been trying to do my part by staying inside and social distancing, which isn’t too far off from what a normal day looks like for me even without a pandemic. I’m just making music daily and working on a new album as well. I’ve probably made at least one new song almost every day during this quarantine. Currently I’m living in Sacramento.

Sounds productive. I love how “Knock Me Down” is basically as short as a punk song, in your ear/hypes you up and explodes with energy and Boom. You’re left that way like ,”WTF just happened?”. Haha. I noticed the songs on MK Ultra are like that too. I like how your gets really fast and the delivery has variety. It reminds me slightly of like E-40 or Busta if they were like way angrier and breathing fire busting down a wall with an axe, haha. How did this collaboration with Tommy Lee come about?

Yeah, I firmly believe in just getting straight to the point of whatever idea I have for a song. I’m a pretty frantic person and with music I get bored easily if the song goes on for too long so I find I get the best results when I just hone in and let the creativity flow. I try not to overthink my music too much.

The Tommy collab really just came out of nowhere. My friend Danny Lohner had showed my stuff to Tommy and he really fucked with it so he reached out to me and sent me a couple beats. I instantly just started recording the vocals in my home studio and now here we are, almost 2 years later, and we got a music video for it and It’s one of the first singles on his album! I’m just really happy about the whole situation and everything and I couldn’t be more grateful to have had the opportunity to work with him on this.

Hip hop/rap and rock both have so many different facets and possible approaches. A lot of people now are interested in, say, combining trap and pop or whatever is currently the most popular. Is there a certain side of the artform that speaks to you the most? I know you have rocked Behemoth and Death shirts on your IG when I lurked it and saw your pics w James Shaffer and Tommy.

Yeah so I grew up on Rock and Metal. I remember the first band I really got into was Nirvana. As a kid, I was always just looking for the loudest most aggressive music I could find, I went through so many phases listening to almost every sub-genre of metal – from Slipknot to Meshuggah and everything in between. Ever since high school my favorite band has been Deftones. They never stick to one sound and they’ve always evolved their sound with every album. That’s what inspires me the most – acts who don’t stay comfortable and do the same thing for five albums. I got into hip/hop and rap a lot later than most people. I got started with Mac Miller and Kanye. All throughout high school I was in metal bands. I was also listening to a lot of HipHop at that time so I think that’s what led me to be doing what I do now. My first rap music was heavily Kanye-inspired. I learned how to produce soul beats and spent endless days in my room making beats and trying to emulate that mid-2000s rap sound. One day I found Bones on Soundcloud and he was screaming in a rap song and I was so inspired. I remember thinking to myself, this is exactly the music I’ve been looking for! That really pushed me to incorporate my metal background with my new-found love of underground rap. At this point in my career I dont think that either side speaks to me more than the other. I’ll go from making a very safe sounding auto tuned rap song with bright synth melodies to making a heavily distorted, upbeat screaming Trap-Metal thing within the span of an hour. My mind is always bouncing all over the place and music is really just my outlet to get all that shit out.

That’s the beauty of music. So much room for freedom if you dare to take it. I can relate as my solo project Walking Bomb I can’t stick to one genre. Life is too short, haha. What was your first instrument? What was it like for you growing up?

My first instrument was the guitar. I started learning at age 6, teaching myself all that I could. I’ve played almost every day since then and I’m definitely not the best, but I’m very comfortable with it. I know how to transfer something I hear in my head to the tangible space of reality with general ease. Growing up, for me, was fine. I grew up in Napa for the majority of my life. I had a stable, middle-class family life. I really can’t complain. My parents are great and have always supported me in everything I do.

Support is so important. You’ve released a lot of material the last few years. I respect that, when artists obviously want to work hard and write. What was the most challenging or personal of your releases? I love how “Pharoah” really breaks all the rules wide open. That’s cool because at the end of the day this is your life and you have to make music you love. I love the confidence to go from black metal into like melodic singing and beats.

I’m glad you enjoy that, I think I’m definitely gonna be doing more of those abrasive switch ups in the future. I think that’s really what sets me apart from a lot of other artists in my scene. All of my music is pretty personal to me, I tend to write a lot about how I’m feeling and my struggles with life. I find it best to be honest with the listener so they can relate to it on a human level. But to really answer your question I think my album INFERNO was definitely the most personal project to me. I didn’t even want to release it for a long time because its really off to the side of the direction I want to go with my music. It’s an album about my experience with love and relationships, dealing with anxiety and depression. It’s mostly emotional singing tracks. There’s almost no screaming on it at all which is something I probably wont do again but definitely needed to do at that point in my life, and I’m proud of it now looking back. I still think “MissingOut” is one of the best songs I’ve written.

What does “Leave Me Alone” sound like? I haven’t heard that one yet. Can you talk about it or no?

“Leave Me Alone” is a straightforward HipHop cut. Idk if I can really tell you more…

I know we can’t predict the future but what do you hope it holds? Do you think you’ll always be a musician in some form or another?

I know I’ll always be making music. Its my purest form of expression, I’m pretty sure I need to do it to maintain my mental health, haha. I just hope I can continue making the music I love and sharing it with those who love it as well.