Interview: The Order Of Israfel – Gothenburg Doom and Classic Sounds 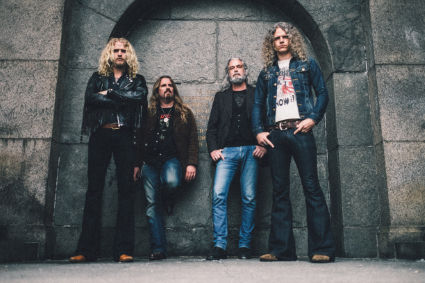 Tom Sutton from The Order Of Israfel may have cut his teeth in Church Of Misery, but his new band has perfected a more overall vocally melodic brand of Doom with classic appeal on their impressive Napalm Records debut full length Wisdom. This baby, Mournful Congregation’s latest and Bled White from Novembers Doom pretty much school everybody in that genre so far this year, with The Order lads really hitting a grand slam for fans of classic stuff seeped in the bong water of Deep Purple, Cathedral and many quirkier folk metal or even hints of classical and thrash influences.

Not just a retro wanna be act, the songwriting on Wisdom will pull you in like a tractor beam or a hypno-gaze from a wizard’s crystal. Voices warning you to turn back in your head go ignored as you enter into the wild magic of this Gothenburg band’s charm. It’s swirling classic rock elements and vocal harmonies merge with rivers of spilled battlefield blood and bongwater to create an impossibly heady brew.

Sweden does it yet again. 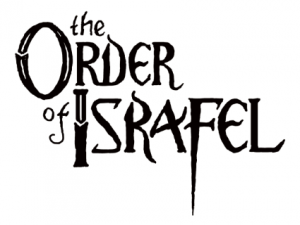 Good morning and thank you for the effort you put into this lovely, rewarding and crushing opus. “Wisdom” begins on such a reflective, pastoral note. Then the doom drops in. What inspired you to start the record this way?
Thanks so much!  I guess I’ve been influenced by albums like Cathedral’s ‘Forest Of Equilibrium‘, Sepultura’s ‘Beneath The Remains’, and by the Metallica songs that start with acoustic guitars.  I love the elegant almost medieval feel that acoustic guitars bring to metal.  I had the main riff for the song ‘Wisdom’, and just played around with turning it into an acoustic intro, and it fit perfectly.  The harmonics on top of the main part were Staffan’s idea, and they really made it totally beautiful and dream-like.

2.How do you feel the best of European Doom culture is similar or different than in the United States?
I guess when I think of American doom culture, my mind immediately goes to sludge stuff like Eyehategod and Buzzoven which is not really my cup of tea, but of course when you actually think about it, bands like Pentagram and Trouble are the ones who established the more melodic style that to me sounds European.  I’m from Australia, so I can only go by the one US tour I’ve done, and the bands I know! 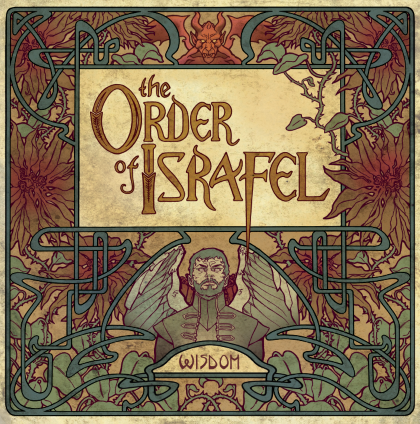 You guys really are going to fill some of the void mighty Cathedral left behind now that their final album,the brilliant The Last Spire has come to pass. I love Church Of Misery’s style of doom, but the vocals are very gruff, for example, often. Love the classic metal wail your band brings! Tom, your experiences in CoM seems to have really brought control of tempo and range to the dynamics, as well as what the rest of the band contribute. Thrilling.

Wow!  That REALLY means a lot to me.  Cathedral are almost my favourite band of all time.  The only band I love more than them in the whole world is Black Sabbath themselves, which gives you some idea of how much I love them.  Yeah, part of the motivation behind writing these songs in the first place was wanting to hear more stuff like Cathedral and Candlemass and not being able to find it.  I love doom metal that is more or less classic heavy metal,but just slower.  I think I would be writing songs with dynamics and different tempos whether I had been in Church Of Misery or not, but I definitely learned about how doom can work live from Church.  Tatsu from COM told me that in the early days, all their songs were slow, and people seemed to get bored at shows, and that was when he realized that there needed to be dynamics and different tempos to make it work live.  In any case, I’m very glad you said that.  When we lost Cathedral, Reverend Bizarre, The Gates Of Slumber, and Candlemass as a recording entity all in such a short space of time, I thought to myself that I’d love it if The Order could put a smile on the faces of people like me who miss those bands dearly.

Do you think, maybe this isn’t fair…but do you think a band like you guys maybe benefits from some of the mistakes of bands in your style have made in the past, as far as…as far as seeing what styles or production values or guitar textures work well together? Like, for example, many people hate Born Again by Sabbath because of the mix on the record, when the songs themselves are fucking great.

I think it’s really rare for anyone to get truly shitty production these days.  I think everyone has benefitted from the mistakes of the past!  I see people on metal forums complaining about production on new albums, and I have to think they are too young to have experienced when bands would release albums that were close to completely ruined by crappy production.  Bands now are lucky that even small-time engineers and producers can get something pretty good for them in the studio.  You don’t get a lot of ‘Reek Of Putrefaction’ type production these days unless the band goes for that sound on purpose.  If you read Tom G. Warrior’s books, you can see that bands often went into the studio to record with people who had never heard anything like it before, and actually hated the bands they were producing.  It’s not like that anymore, thank god!

Yeah, like on the early Amorphis albums they were literally inventing something new. Totally. That was rough for some engineers. So, your jam “Promises Made To The Earth” is an experience. That intro is such a deep, deep vibe. Very therapuetic, almost. Reminds me of tripping and reading Alan Moore’s Swamp Thing and feeling psychedelic love for Mother Earth’s power. I hate how corporations push us away from Green solutions to save the planet.

Thanks!  Yeah, I wasn’t sure if that song would really work, but it’s become a favourite of mine.  That intro turned out great.  If you hear it live, it’s even bigger.  It sounds like the earth’s surface cracking open with hoards of ghosts flying out.  He he!  I’m really glad that the nature vibe is coming across.  I really wanted the whole album to have a ‘forest’ feeling.  That’s where I feel most myself, and most connected to the source of all things, and I wanted the album to have a lot of that luscious, colourful, magical feeling.  And yes, I hope we can all drive towards green solutions before we are forced to.  It will happen sooner or later whether we’re ready or not.

How’d you guys get the pitch perfect drum sounds on this? I feel like Fenriz in Darkthrone sometimes, where a record would be good but the drum sounds make me unable to like it. Your sound has great cymbal clarity and cut but a real dry attack and big roomy bottom. Haha, roomy bottom. LMAO.

Thanks!  We used very high-quality Swedish microphones called Ehrlund for the drums.  There’s a lot of room sound in the mix, which I’m really happy with.  There’s plate reverb on the snare, but not on anything else, ‘cos the room mic provided enough.  I love the drum sound too.  And actually five of the songs on the album were first takes for the drums.  Hans had a bad cold that day, but he must have been in the zone somehow.  I’m like you aboutdrum sound, actually.  If I don’t like the drum sound on something, it can really bother me.  Like, people complain about the ‘St. Anger’ snare sound, but I actually really can’t stand the ‘Master Of Puppets’ snare.  It just sounds so floppy and lifeless to me.  Anyway, I’m glad we got something good for the album!

Does it feel bad ass to harmonize with each other and know you are really creating big energy vocally over some huge riffs? I love your band’s harmonies or a band like Hammers Of Misfortune, who just fucking bring it so right on.

Actually, it’s something we’re working on more and more.  We really feel like it’s something that can really sound beautiful and huge.  It does feel great to sing together!  There’s something almost supernatural about how we as people respond to harmonized vocals and guitars.  there’s something poetic about it.  I love Enya, actually, and I think that kind of harmony singing and chanting has affected me a lot. 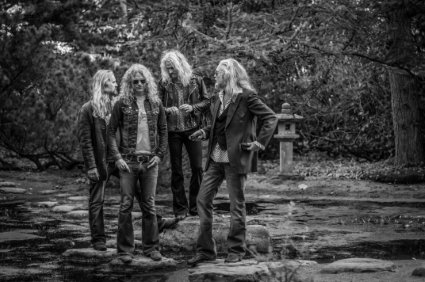 So, “Morning Sun (Satanas)” closes this baby and rightly so. It’s kind of impossible to follow. Do venues turn to a smouldering ruin after you play this live?

Ha!  Actually, it does feel great to finish with that song.  It has the end of the world in it, so only right that it should go last!  Yeah, playing those big guitar melodies feels like a great way to finish a show.  It’s often great to finish on something short and rockin’ too, but this’ll be the closer for a while, I guess!

More News On The Order Of Israfel:

More On: Doom Metal, Exclusive, The Order Of Israfel, Napalm Records
share on: