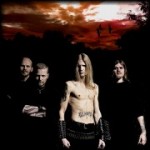 Hváll of Vreid released this statement on Vreid’s MySpace blog: We are almost finished with our Norwegian tour, when we proudly can announce a full European tour for May/June. We will kick of in Bochum/Germany on May 27th. This will be the our first shows outside Norway since the successful release of our new album «V». We are thrilled to bring you the new material as well as the old stuff, as the Norwegian shows has been excellent. For this tour tour we have a killer line up consisting of: Vreid – Kampfar – Secrets of the Moon & support act Krakow. The tour will take us to 7 European countries and will be a mix of clubs shows & festivals. It is a great tourlist with many cities with with loyal fans, as well as new cities such as Katowice, which will be our first show in Poland. See you in the spring. Hváll & The Brigade