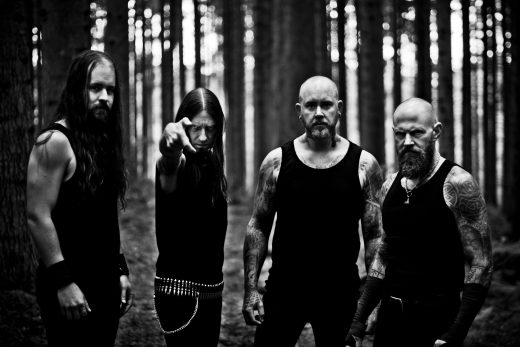 Swedish blackened death veterans KING OF ASGARD have released the foreboding and sinister track  ‘ammobiærg’ as the third single taken from their forthcoming album svartrviðr (“black wood”), which is slated for release on May 28, 2021. Check it out below!

KING OF ASGARD comment: “We are now closing the circle of our song premieres with the epic giant ‘ammobiærg’ as the third conjuring”, tells bass player Jonas Albrektsson. “Once again, we visit that mythical mountain Omberg and its protector, Queen Omma or ‘Ama’ in Old Norse. This pagan goddess is still lingering in the plains, heights, and waters and in the legends surrounding that fog-clad mountain since ancient times. Although centuries have passed, she continues to wield spiritual influence upon all people that reside on her abode and its surroundings. This is our sonic reverence to that grey hermit shrouded in shadow and misty glow. Come join us and wander into our dark past.”