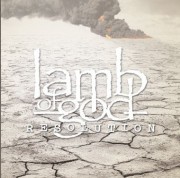 Lamb of God ‘s new album, Resolution, is due out January 24 and the band isn’t wasting any time before they go on tour to support it.  They’ve announced a few dates so far and have decided to take Too Late the Hero out on the road with them.  For a list of tour dates click here.

Resolution was Produced and mixed by Machine & Josh Wilbur and is being released by Epic Records.