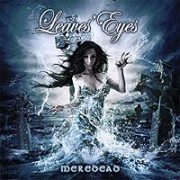 Fans of Leaves’ Eyes anticipating their forthcoming album on Napalm Records, “Meredead,” can now ponder over the track listing, which the band announced in preview of the April 22nd album release.

The album will include a cover version of Mike Oldfield’s “To France” as well as traditional Norwegian songs, “Kråkevisa” and “Nystev.”