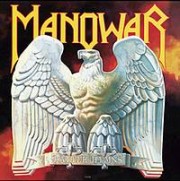 Power metal legends Manowar have announced that reknowned actor Christopher Lee will be the narrating voice for the song “Dark Avenger” from their upcoming release “Battle Hymns (2011),” a re-recording of the band’s debut album.  Lee’s illustrious film career goes back over 50 years, but he is probably best known for his roles as Saruman in the Lord of the Rings Trilogy and Count Dooku in the recent Star Wars movies.  The band issued this statement:

He has played key parts in some of the biggest, most legendary movie franchises of all times. He has played kings, wizards, evil forces and shining knights. He is worshipped by movie and theatre fans all over the world. He speaks multiple languages fluently and is an accomplished singer of opera and metal as well. He has been knighted by the Queen of England and honored with numerous awards.

And now, he is joining forces with The Kings Of Metal to rewrite Heavy Metal history: The legendary Sir Christopher Lee will be the narrating voice on ‘Dark Avenger’ on ‘Battle Hymns 2011’!

Sir Christopher Lee is a brother of true metal.