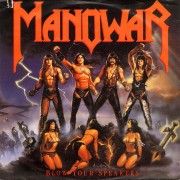 New York Power Metal band Manowar has announced that their tour will branch out to Greece in March.  After confirming their US and UK tour dates they’ve finally decided to listen to all of the demands from their Greek fans and will be traveling there in March. The band plans on playing the entire Battle Hymns record in celebration of the release of Battle Hymns 2011 along with their classic songs.