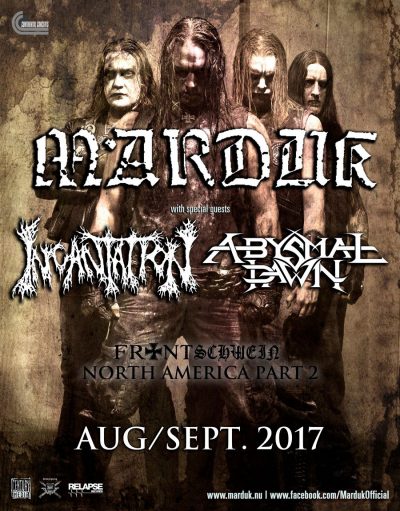 The tour will kick-off in Los Angeles on August 18, traveling southeast across the U.S., before voyaging across the border to Canada and making their final stop in Rouyn-Noranda, Quebec on September 3.

MARDUK will continue to support their 13th studio album to date, “Frontschwein”, their first solely war-themed album since 1999’s legendary release, “Panzer Division Marduk”, which “continues to polish their raw and to-the-point style of black metal” (CVLT Nation) while “positively brimming with evil hooks and virulently infectious harmonies” (No Clean Singing). Listen and download it via iTunes at http://smarturl.it/frontschweinITUNES.