MESSIAHVORE to release their self-titled album in February 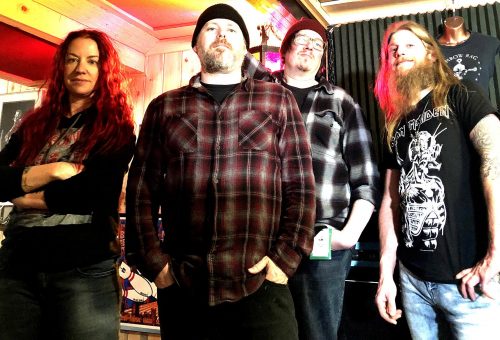 With a name like MESSIAHVORE, you know the band probably aint playing Country and Western music. Hailing from Denver, Colorado MESSIAHVORE are set to release their self-titled album via Coffin & Bolt / Golden Robot Records on 26th February. Pre-order HERE.

“MESSIAHVORE‘s first album release features 9 tracks. All the music was recorded live in studio and then the vocals and some extras added after the fact. We were stoked to have tracked all in the same room with one another and bring the music with the natural energy, feedback and volume of our live performances.

The recording was done in Denver in our own commercially run studio known as “The Crash Pad” Bart, the guitarist and singer engineered the recording. We simply set up and test tracked, locked in the tones and let it rip. The results speak for themselves. We are proud of our first effort and are looking forward to sharing it with all the heavy music fans of the world.

Lots of density on this debut release. Thick guitars and bass combined with saturated vocals. Catchy hooks but not overly commercial. “The Last Word” is an epic instrumental that supplies ambient vibe for days. “Betrothed” hits hard and is either about overbearing control or Vampires. You can make the call. “Cult Worship” is one of our favorites and “Doublecross” starts out with some Sabbath vibe then moves into desert rock territory. MESSIAHVORE mixes elements of groove metal, doom, stoner rock and a bit of industrial to complete the sound.”

It was a fast start for the band, opening for Fu Manchu, Sasquatch, Nebula, Daikaiju and were slated to play with Lord Dying then the COVID hit the states. You know the rest of that story. This led to them buckling down and writing a seven song EP. The band signed to Coffin & Bolt Records which is incorporated with the international mainstay Golden Robot Records.