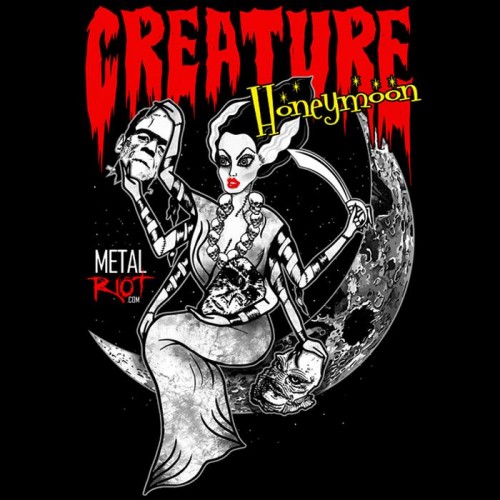 Tyrant Of Death ,MongrelBand, The Great Goddamn, Fad Nauseam, Golden Torso (ex-Kylesa), Night Viper (ex-Church Of Misery), GET OUT. , Geezer , Tiger Piss, Red Neckromancer , Cirrhosis and Septa will all partake in the bloody ritual that is Metal Riot’s Creature Honeymoon this Halloween. The compilation will be out on the holiday with select tracks revealed leading up to the spookiest night of the year.

Last year on pumpkin day I published a Davey Havok (Afi , Xtrmst) interview on this site and wondered how I would top the October gothy vibes of that this year. I talked to Dave Buck at our sister site Dying Scene and he was all for the comp idea. Bands soon got into it and here we are.

The compilation will feature 13 tracks based on many types of monsters from alien weed mummies to vampires to small children to gorillas and zombies, etc. The cover art by my friend Kim Zangrando came from my love for Jarboe’s Mahakali album and Penny Dreadful and a Kali-themed Bride of Frankenstein just seemed like the coolest thing in the world. Kim took my basic idea and made the awesome image above complete with rad lunar vibes.

Stay tuned starting in October for a song a week leading up to the full release on Halloween. Don’t forget to howl!!!!!