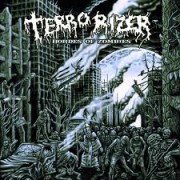 We told you about it months ago, and it’s finally here in all of its glory.  I’m talking about the video for L.A. grindcore act Terrorizer‘s new song, “Hordes of Zombies” of course, and actually it’s right here not over there.

The song is taken from their recent release on Season of Mist also called Hordes of Zombies.  This is also the band’s first video and includes some of the first footage of legendary drummer Pete Sandoval after his well publicized back surgery.

More On: Grindcore, Video, Terrorizer, Season of Mist
share on: