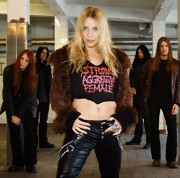 Melodic death metal Swedes Arch Enemy appease the eager masses with another song from their oh-so-close-to-being-released album “Khaos Legions,” which hits stores on May 30th from Century Media.

Angela Gossow comments: “Bloodstained Cross – I’d say the title speaks for itself on this one! A remorseless and brutal, yet intricate knuckleduster thrash-attack. Some epic guitar moments in this one too courtesy of the Amott bros. Will be a killer track live… Now turn up the volume and blast this godless anthem all over town!”

So here you go, enjoy “Bloodstained Cross.” Click here for the song.