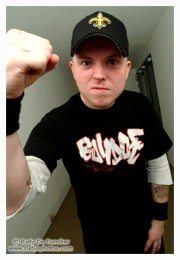 Hatebreed vocalist Jamey Jasta is primed to put out a solo album on July 26th entitled “Jasta” and is ready to share the first song with the world. Century Media is handling the UK release, while eOne music is publishing in the States.

Here is what the vegan front man had to say about his first solo effort:

“I did all of it by myself, except for the guest parts. I did it all throughout 2008, 2009 and 2010 so it was fun to go back, listen to those old tracks and go, ‘These are still good, let’s release them!’ I’m just very lucky that I’m in a position to be able to do this and I’m grateful that the eOne label is giving it such a great push.”

On a potential solo tour, Jasta is less optimistic:

“I don’t see myself doing a lot of touring for this at all. I’d like to, but I really want to focus on getting Hatebreed out for the rest of the year.”

Check out the new track here and click here for a video with Jasta explaining a bit about the new album.