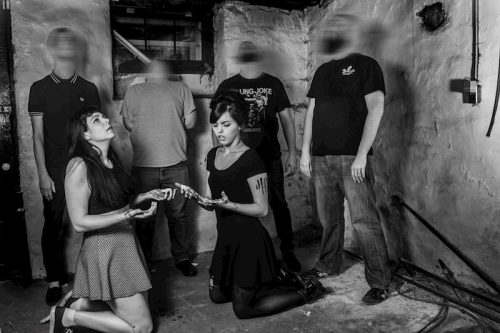 Redbait‘s pending June 14th release Cages (Pre order HERE) is mandatory listening if you don’t want to miss out on one of the brightest lights of 2019’s underground. The band’s New Age Records debut will make you feel revolution singing in your blood, a powerful second EP from a group with so much promise ahead of them. Listening to their guitars churning like a raging river atop powerful drums backing up intense political vocals, you can’t deny the immediacy or the band’s ability to lay it all on the line. There is nothing worse to me in music than being apathetic about your art or platform and no one would ever accuse Redbait of that.

Today we are thrilled to debut one of my favorite songs from their new release, the thrilling composition “Bred For The Knife”. The production is pitch perfect between remembering energy over pristine while still sounding incredible, well serving the driving and subtly complex song. This one has a few tricks up the sleeve you wouldn’t expect from where it begins, including my favorite bridge of the EP (it kind of sounds like Queensryche meets Bane!). This band knows just where to give more and when to hold back. It’s exceptional. I hope someone whispers in the ears of Rolo Tomassi or Propagandhi to take them on tour immediately.

“We wrote “Bred for the Knife” as a commentary on the commodification of animals, specifically in factory farming. The problem of violence against animals isn’t taken seriously and I think that can largely be attributed to the fact that the butchering and processing of animals bodies are discreet and avoided. It isn’t a practice that a lot of people are willing to confront. The lyrics mention animal cruelty, environmental destruction, and worker exploitation as interconnected struggles in this industry. The commodification of animals is a cruel outcome of capitalist society. It’s something that most of us feel very compelled to talk about and inspire conversation through the music we make.”

It really is an important issue. Some pro life dipshit on Twitter was arguing with my girlfriend yesterday and saw no harm in not caring about the environment or animals when she brought up why he ate meat if he was pro-life. He said he doesn’t eat babies, refusing to see her point. Well, bud – you ever have leg of lamb? Congrats. You ate a baby. It’s still a baby. Asshole.

Recorded and mixed by Will Jameson, Cages will be available on 7” vinyl from New Age Records.

Digital version will be available 06-14-19 at https://redbait.bandcamp.com/