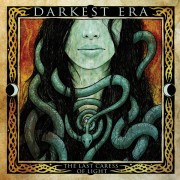 Ireland’s folk metalers, Darkest Era, are set to release their new album, “The Last Caress of Light”, on February 15th, 2011 on Metal Blade Records. The band has teamed up with InvisibleOranges.com to debut the first track, “An Ancient Fire Burns,” from the forthcoming album. Being hailed as a dark, stormy, epic mix of Celtic Metal, Irish Folk and heavy metal bands such as Warlord, Iron Maiden and Thin Lizzy, “The Last Caress of Light” stands out with intense emotional power and honesty.

Fans can also check out a new video studio diary that chronicles the recording of the album. Both the video and the track are available now here.

The album can be ordered on Metal Blade’s brand new merch store.