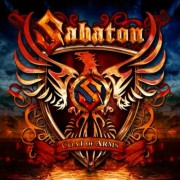 Swedish power metal ensemble Sabaton have released their fourth US tour vlog. Staying true to their fans and change their setlist for the 101st Airborne Division. Go and watch it here.

Sabaton also recently announced ten tour dates in Russia, nine of which will be in support of headlining act, Germany’s wind of change, Scorpions. Said Sabaton in response to the announcement: “We have already confirmed that we will be playing with Iron Maiden this year. Next legendary band to tour with is the Scorpions, and this time in Russia. We have long waited to tour Russia, and lots of fans have requested our presence for many years and now the moment has finally come.”